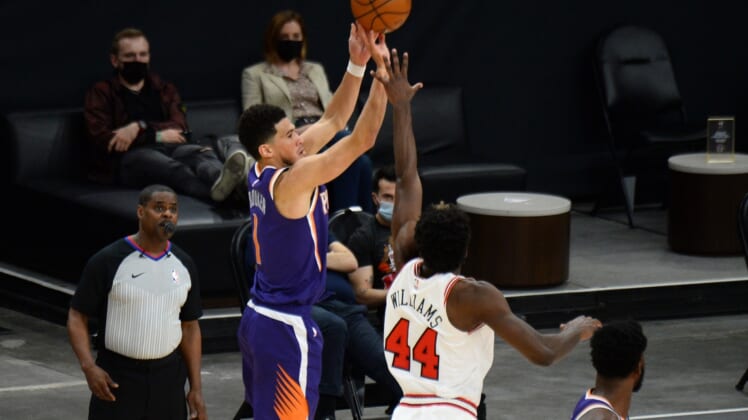 The way Phoenix responded after that game, a 102-97 Thunder win on Jan. 27 in Phoenix, proved to be a turning point.

And, though Booker missed the two games after that, for Booker as well.

Booker and the Suns face Oklahoma City on Friday night in Phoenix on a roll, having won four consecutive games and seven of their past eight to jump up to second in the Western Conference.

Since returning from the hamstring injury that kept him out for four games in late January, including that loss to the Thunder, Booker is averaging 26.8 points, 4.4 rebounds, 4.7 assists and 2.9 turnovers per game while shooting 50.4% from the field.

All of those numbers are up from the season’s first 14 games, when Booker averaged 22.9 points and turned the ball over 4.1 times per game.

And the team success that eluded Booker for his first five NBA seasons has come along with that improvement.

“Yes, it does,” Booker said when asked if his putting up big numbers matters more now that Phoenix is winning. “But just winning the game, honestly, that’s the main objective every night.

“And we’ve been coming out with some close ones as of late.”

“Sometimes I don’t really pay attention to it like that, I just expect it,” Suns point guard Chris Paul said of Booker’s numbers. “I think the fact that he does it like in the course of how we’re playing. It’s not like he’s out here hunting and trying to get it.”

The Thunder have changed significantly since that win in Phoenix.

Neither of Oklahoma City’s leading scorers in that game – Shai Gilgeous-Alexander and Al Horford – are active. Gilgeous-Alexander has missed the past four games and is expected to miss significant time with plantar fasciitis while Horford has been shut down for the season as the Thunder have gone to a younger rotation.

Among the other key contributors in that game, Luguentz Dort has missed the past two games in concussion protocol, Darius Bazley the past 11 with a shoulder injury, and Hamidou Diallo has been traded.

Those rotation changes include the addition of Svi Mykhailiuk in the trade for Diallo.

Mykhailiuk has scored 38 points over the past two games, including 22 in Wednesday’s win over Toronto.

He’s played just seven games with the Thunder, but Mykhailiuk is shooting 47.7% from the floor since the trade; he was at 37.7% in 36 games with the Pistons.

Thunder coach Mark Daigneault said Thunder scouts pegged Mykhailiuk as a player with plenty of growth potential before the trade.

“He’s a really complete player and has a runway as a player as well – can get a lot better,” Daigneault said. “We still think he’s pretty early in his developmental track and we’re going to allow him to keep exploring all facets of his game.”