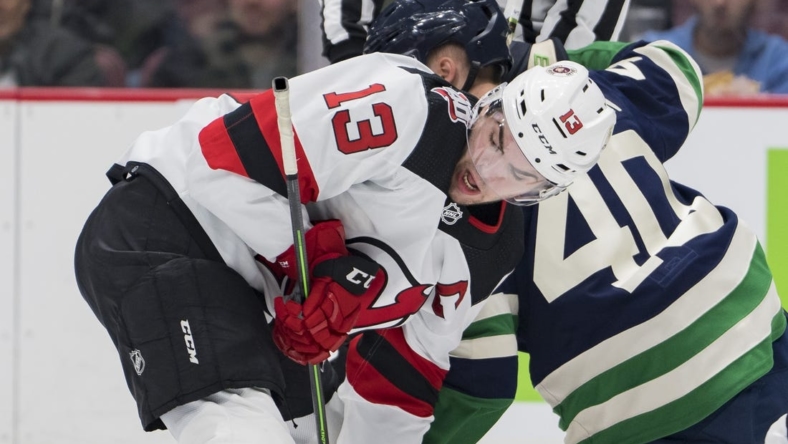 Michael McLeod, Dawson Mercer, Yegor Sharangovich and Jack Hughes also scored for the Devils, who have won four straight — their longest winning streak since they won their first four games of the 2018-19 season.

Seven players scored a goal apiece for New Jersey in a 7-1 win over the Columbus Blue Jackets on Sunday. Hischier is the only player to score in each of the last two wins.

Hischier scored 4:36 into the first and just eight seconds into a power play. After winning a faceoff with Horvat, Hischier skated to the right of Demko, where the center placed his stick down for a pass from Jasper Bratt and tucked the puck into the wide open corner of the net.

The Devils doubled their lead with 1:56 left in the first, when McLeod scored on the rebound of a rebound by Miles Wood, who had pounced on the puck after Demko turned back a shot by Nathan Bastian.

The Devils scored a short-handed goal with four seconds left on the Canucks’ power play. Mercer finished off a 2-on-1 when he took a pass from Sharangovich, who dished behind the feet of a sliding Oliver Ekman-Larsson and flicked a forehand into the upper corner of the net at 9:25.

Sharangovich capped another 2-on-1 opportunity barely two minutes later. John Marino’s clearing pass hit Jesper Boqvist in stride before Boqvist passed behind Horvat and to Sharangovich, who fired a shot past the stick of a sprawling Demko with 8:23 remaining.

The Canucks scored just eight seconds into a power play with 3:37 left in the second. Horvat won a faceoff with Hischier before sending his shot from the slot past Blackwood, who was screened by teammate Jonas Siegenthaler as he battled with Andrei Kuzmenko.

Horvat scored another power-play goal after Demko was pulled with 3:37 left, but Hughes scored an empty netter with 1:02 left to end any comeback hopes for the Canucks.