Devils pull away from Canadiens for 10th straight win 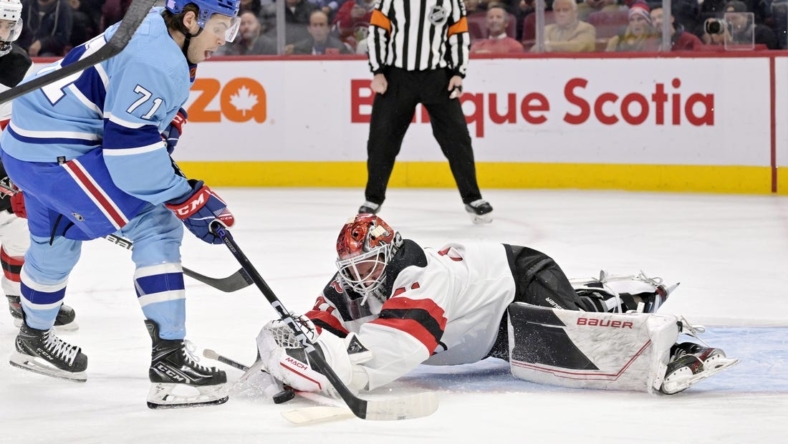 Jack Hughes scored a pair of second-period goals Tuesday night for the red-hot New Jersey Devils, who won their 10th straight game by cruising past the host Montreal Canadiens 5-1.

Dougie Hamilton also scored in the second while Jesper Bratt scored shortly before the midway point of the third and John Marino added an empty-netter in the final seconds for New Jersey.

Evgenii Dadonov scored in the second for the Canadiens, who had their three-game winning streak snapped. Jake Allen recorded 34 saves.

After a scoreless first period, a tripping call on Kirby Dach 2:30 into the second generated the power play that led to a second-effort goal by Hughes.

Hughes’ first shot sailed wide right of Allen as he was screened by Devils right winger Nathan Bastian. Bratt collected the rebound and passed to Hamilton, who dished to Hughes before Hughes skated into the left faceoff circle and beat Allen over his stick shoulder as he was screened by Bastian at the 3:57 mark.

Hamilton picked up a loose puck to begin the sequence that ended with him scoring an unassisted goal by firing a shot that banged off the crossbar and into the net 6:06 into the middle period.

Dadonov got open in the crease and took a pass from Sean Monahan before scoring the Canadiens’ goal, a shot into the wide open right corner of the net with 10:05 left in the second.

Another Canadiens turnover led to Hughes’ second goal with 4:31 left in the second period. Allen’s pass off the back boards was intended for Jordan Harris, but Dawson Mercer plucked the puck from behind him and passed to Hughes, who scored beyond Allen’s stick as Montreals’ Johnathan Kovacevic fell down in the lane separating Hughes from the goalie.

Hischier swiped the puck from Brendan Gallagher to begin a frantic three-shot sequence that ended with Bratt firing an angled shot off Allen and into the net with 7:41 left in the third.

Marino scored a length-of-the-ice goal from the faceoff circle in the Devils’ zone with four seconds remaining.