PREVIEW: New Jersey Devils looks to close the gap with Islanders in rematch 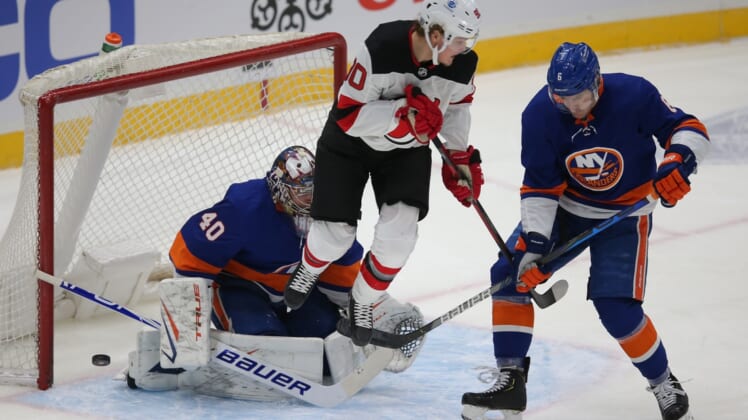 One sequence late in the first period Thursday night revealed the differences between the New York Islanders, who came within two wins of reaching the Stanley Cup Finals last summer, and the New Jersey Devils, who have missed the playoffs in seven of the previous eight seasons.

The Devils will look to begin closing the gap Sunday night, when they are scheduled to host the Islanders in the back end of a home-and-home series in Newark, N.J.

Barzal picked off a Michael McLeod pass deep in the Islanders’ zone to set up Eberle’s first goal, which came with 20.9 seconds left in the first period and doubled New York’s lead to 2-0.

The goal by Eberle was the difference between the Devils feeling pretty good about themselves heading into the second period — New Jersey was outshot 14-6 prior to Eberle’s tally — and staring at a difficult uphill climb against a team well-suited to protect multi-goal leads.

“We have a lot of young players,” first-year Devils head coach Lindy Ruff said. “We have to learn how not to lose and that was a huge lesson right at the end of the (first) period, not to give those guys that opportunity to get that second goal.”

The second goal was doubly valuable for the Islanders, who haven’t squandered a multi-goal lead in a regular-season loss since Feb. 27, 2020, when they scored the first two goals in a 3-2 overtime loss to the St. Louis Blues.

The goal also ensured the Devils, who scored first in the first period in each of their previous two games, wouldn’t generate any momentum heading into intermission.

“I thought we played the right way,” Islanders head coach Barry Trotz said. “We jumped on them. They’ve been a quick-start team. I thought that was real key.”

Islanders goalie Semyon Varlamov is likely to draw the start Sunday after giving up his first goal of the season Thursday, when he made 30 saves. Nathan Bastian’s goal 2:10 into the second period snapped Varlamov’s shutout streak at 142 minutes and 10 seconds, the longest such streak to open a season in franchise history and the longest in the NHL since the Minnesota Wild’s Darcy Kuemper kept opponents scoreless for the first 164 minutes and two seconds of the 2014-15 season.

The Devils, who lost starting goalie Mackenzie Blackwood to the NHL’s COVID-19 protocol list about two hours before faceoff Thursday, are expected to counter with either Scott Wedgewood or Eric Comrie. Blackwood was not at practice Saturday. Ruff said he is day-to-day.

Wedgewood made 31 saves Thursday in his first NHL appearance since Feb. 13, 2018, when he recorded 28 saves for the Arizona Coyotes in a 2-1 win over the San Jose Sharks. Comrie, whom the Devils claimed off waivers from the Winnipeg Jets on Jan. 12, hasn’t appeared in an NHL game since Dec. 15, 2019, when he made 28 saves for the Detroit Red Wings in a 4-2 loss to the Los Angeles Kings.