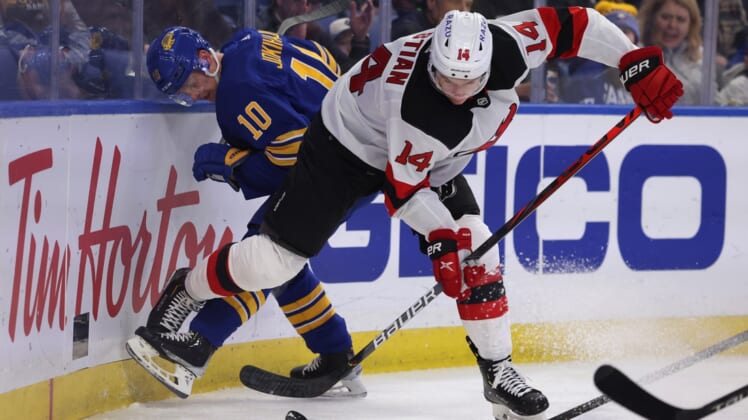 Jack Hughes scored the tiebreaking goal 4:28 into the third period and collected two assists in the first period as the visiting New Jersey Devils ended a six-game losing streak with a 4-3 victory over the Buffalo Sabres on Wednesday night.

The Devils won their first game since beating the Philadelphia Flyers on Dec. 8 thanks to Hughes’ fourth career three-point game.

Hughes notched the primary assist on a power-play goal by Dougie Hamilton early in the first and was credited with the secondary assist on an even-strength tally by Jesper Bratt midway through the first.

Hughes then scored his sixth goal and fourth since returning from a dislocated shoulder on Nov. 30.

Hughes snapped a 2-2 tie by charging to the net and waiting for a rebound. After Buffalo goalie Ukko-Pekka Luukkonen stopped Yegor Shrangovich’s slap shot, he was out of position and Hughes was able to pounce on the loose puck.

With Buffalo’s Rasmus Dahlin draped on him, Hughes got to the right side and slid a backhander off the defenseman and over Luukkonen.

Shrangovich scored 2:22 after Hughes struck and his re-direction of defenseman Ty Smith’s blast from the left point proved to be the game-winner when Buffalo made a late charge.

Tage Thompson scored twice in the opening 3:17 of the second and Ethan Prow also scored in his NHL debut with 5:22 to go in the game as Buffalo missed out on getting a point in its fifth straight contest.

Hamilton opened the scoring 4:43 into the game shortly after Nico Hischier pried the puck from the right corner and moved it to Hughes. From above the right faceoff circle, Hughes quickly dished it to Hamilton, who fired a slap shot through traffic near the center of the ice.

A little over seven minutes after Hamilton scored, Bratt made it 2-0 by driving to the right side of the net by putting the rebound of P.K. Subban’s slap shot into the net.

Thompson scored twice in the opening 3:17 of the second by redirecting a point shot from Alec Tuch 33 seconds in and finishing off a breakaway following a New Jersey giveaway. Prow made it a one-goal game by sweeping a rebound over Blackwood’s left pad.