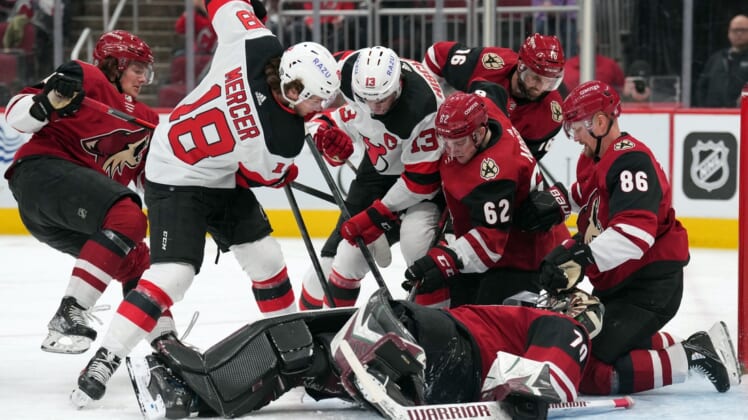 Yegor Sharangovich and Nico Hischier each tallied three points and Fabian Zetterlund and Kevin Bahl scored their first career goals as the visiting New Jersey Devils earned a 6-2 victory over the Arizona Coyotes on Tuesday.

Tomas Tatar and Jesper Boqvist also scored for the Devils (26-41-6, 58 points), and Nico Daws made 19 saves for his team-leading 10th win of the season.

Boyd gave the Coyotes a 1-0 lead 1:13 into the game — his 14th goal of the season coming off a feed from Schmaltz.

Zetterlund tied it for the Devils when he scored on a two-on-one rush with Hischier, while playing in his sixth career game.

Bahl’s first tally, in his 15th career game, came on a blast from the left point at 5:24 of the second period.

Schmaltz’s game-tying goal, his 23rd tally of the season, came from the right faceoff circle with a screen out front from teammate Nick Ritchie.

Tatar put New Jersey ahead for good a mere 38 seconds later with his 15th of the season. Vejmelka turned the puck over and Jesper Bratt sent Tatar a pass out front before the Coyotes’ goalie could get back into position.

Boqvist followed with his seventh goal 22 seconds later; he pounced on a loose puck in front of the Arizona goal.

Sharangovich cleaned up a pair of loose pucks to score twice in the final 4:24 and give him 22 on the season. He also had an assist.

Forwards Jack McBain and Nathan Smith each made their NHL debuts for the Coyotes. Smith played for an NCAA title Saturday with Minnesota State.