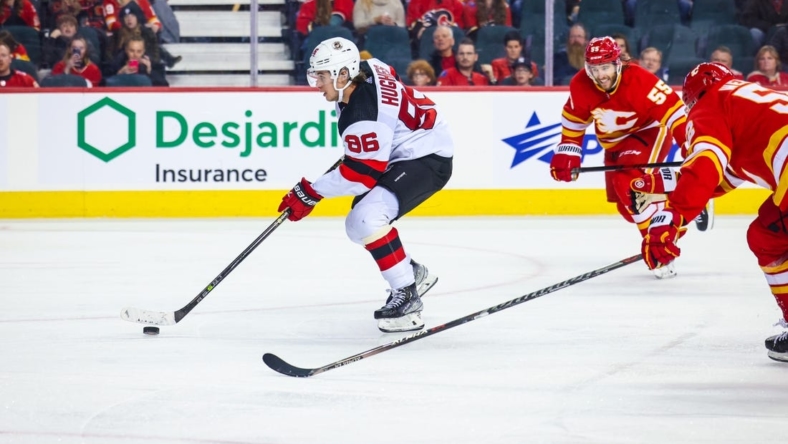 The skidding Flames will again look to put together a complete effort on Tuesday night, when they visit the Devils in Newark, N.J., in the second game of a three-game, East Coast road trip.

The Flames squandered a two-goal, third-period lead against the Islanders on Monday night and fell 4-3 in overtime in Elmont, N.Y. The defeat was the fifth straight for Calgary, which held a lead in four of those losses and in five of its six defeats overall this season.

The surging Devils won their sixth straight game Saturday, when they frittered away a two-goal, first-period lead in Calgary before Fabian Zetterlund scored 2:38 into overtime to lift New Jersey to a 4-3 victory.

The Flames, who scored 89 seconds after the opening faceoff on Saturday but trailed 3-1 after the first period, got off to a much faster start on Monday.

Calgary outshot the Islanders 30-12 through two periods and maintained a 3-1 lead until midway through the third period, when New York’s Anders Lee and Kyle Palmieri scored in a 59-second span. Palmieri’s goal was an unassisted tally following a turnover deep in the New York zone by defenseman Nick DeSimone.

“I thought we had a great start and obviously we didn’t play a full 60 minutes and they took advantage of that,” Flames left winger Jonathan Huberdeau said. “Overall I thought we still put the effort (in), but at the end of the day, it’s not enough.”

The Devils have relied on late theatrics to lengthen what is now their longest single-season winning streak since a eight-game run in February 2011.

New Jersey won four games by a combined margin of 19-5 between Oct. 25 and Nov. 1 before scoring three unanswered goals in the third period to edge the Edmonton Oilers 4-3 on Thursday. Ryan Graves and Jesper Bratt scored the tying and go-ahead goals just seven seconds apart, the fastest two-goal flurry in franchise history.

The Devils had all three shots in overtime Saturday night, when they won a sixth straight game.

“You’re going to have to win games in a lot of different ways,” Devils coach Lindy Ruff said Saturday night. “To find ways to win, you can’t always win it in an easy fashion, and tonight was not an easy fashion.”

The Devils are expected to be without No. 1 goalie Mackenzie Blackwood on Tuesday. He sprained a medial collateral ligament while kicking a puck out of the crease against the Oilers, and he is scheduled to visit with doctors on Tuesday, according to Ruff.

Jacob Markstrom took both overtime losses for the Flames on Saturday and Monday, making 31 and 28 saves, respectively.