Devils beat Sens in OT to run win streak to 8 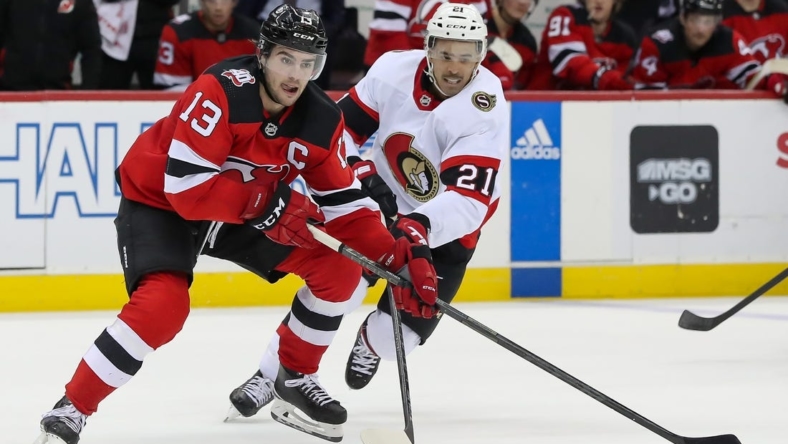 Nico Hischier scored a power-play goal with 33 seconds left in overtime as the New Jersey Devils extended their winning streak to eight games with a 4-3 win over the visiting Ottawa Senators Thursday night in Newark, N.J.

The Devils are on their first eight-game winning streak since Feb. 6-22, 2011, and Hischier kept it going with his 11th career game-winning goal.

New Jersey got a late power play when Jack Hughes drew an interference penalty on Thomas Chabot racing for the puck near the neutral zone. After Hischier won a faceoff from Tyler Motte, he moved the puck to Hughes in the right circle.

Hughes then whipped the puck to Dougie Hamilton, whose slap shot from above the circle was deflected by Hischier past goalie Anton Forsberg and gave the Devils their fourth straight one-goal win.

Akira Schmid put the Devils in position for the win by making five of his seven saves in overtime to earn his first career win. He entered when Vitek Vanecek was lifted for precautionary reasons with 9:23 left in the third following a second-period collision with Chabot.

Schmid made three stops on Tim Stutzle during an Ottawa power play and also made a point-blank stop on Ottawa captain Brady Tkachuk.

Hischier also scored in the first period and the Devils improved to 10-0-0 when he records a point. Tomas Tatar and Miles Wood also scored for the Devils, who are 11-1-0 in their past 12 games.

Shane Pinto recorded his first career two-goal game by getting a pair of tying goals, though Ottawa dropped its seventh straight. Travis Hamonic also scored for the Senators, who have lost each game in their skid by two goals or fewer.

Forsberg made 36 saves but wound up slamming his stick on the net after Hischier’s third game-winning goal of the season.

Tatar opened the scoring 4:44 in when his wrister from the middle of the slot caromed off Ottawa’s Parker Kelly and past Forsberg. Pinto scored his first goal on a redirection with 9:45 left in the first and Hamonic gave Ottawa a 2-1 lead 69 seconds later.

Hischier finished off a 2-on-1 with 1:54 left in the first and Wood chipped a loose puck into the net early in the second before Pinto scored the tying goal 1:29 into the third.