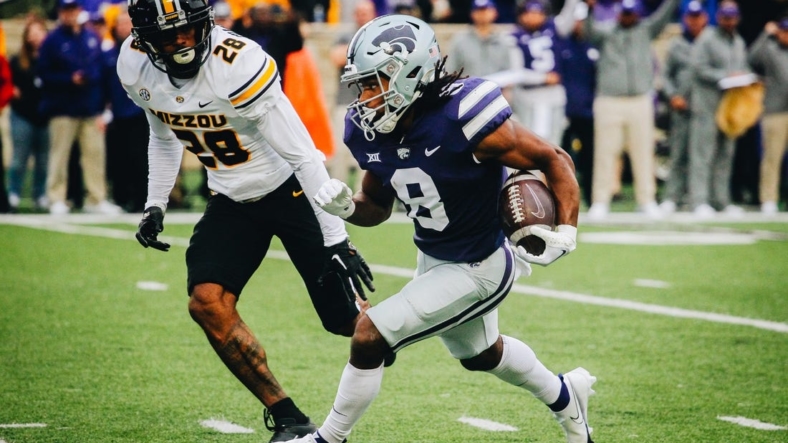 Deuce Vaughn rushed for 145 yards and two touchdowns as Kansas State defeated Missouri 40-12 in the first matchup between the former conference foes since 2011.

K-State (2-0) shut out FCS opponent South Dakota 34-0 in its opener, and was just as impressive against Missouri (1-1) from the SEC. Wildcats defenders recorded 10 tackles behind the line of scrimmage.

Missouri took the opening kick and moved the ball, using nine runs in 11 plays to set up Harrison Mevis’ 49-yard field goal for a 3-0 lead. But that was about it for Mizzou.

The Wildcats responded with their own 11-play drive covering 75 yards and capped by a 1-yard Vaughn touchdown run. It was Vaughn’s ninth straight game with a rushing touchdown.

Quarterback Adrian Martinez capped the next drive with a 16-yard scamper to give Kansas State a 14-3 lead. Martinez, who only had 53 yards passing in his debut, had 58 yards in the first two drives.

After a lightning delay lasted more than an hour, K-State stopped a third-down play and forced Missouri to punt. Phillip Brooks returned the punt 76 yards for a touchdown and a 20-3 lead. It was Kansas State’s 127th non-offensive touchdown since 1999, the most in Division I. The Wildcats entered the game with nine more than Alabama in that time period.

Mevis connected on a 44-yard field goal in the third quarter. With K-State’s offense sputtering slightly, its defense stepped up. K-State had three interceptions in Missouri territory on three straight possessions but only managed a pair of Chris Tennant field goals.

Missouri switched quarterbacks late in the third quarter, but that didn’t change their fortunes. Brady Cook had two picks on his last two throws. Jack Abraham replaced him and threw back-to-back picks, the latter one just inside K-State territory.

Vaughn’s second touchdown of the game from 24 yards out gave K-State a 33-6 lead and put Vaughn over 100 yards for the eighth straight game. He’s two off the school record set by Darren Sproles.

DJ Giddens later scored on the ground from 28 yards to push the Wildcats’ lead to 40-6 before Missouri scored its touchdown on the game’s final play, a 1-yard run by Cody Schrader.