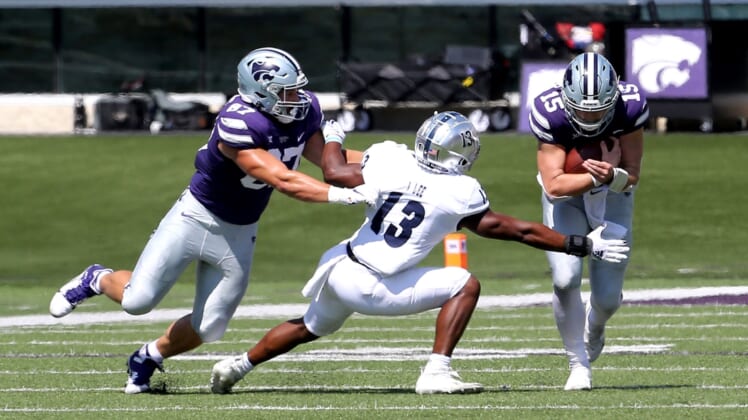 It didn’t take long for K-State (3-0) to get on the board. Will Howard hit Daniel Imatorbhebhe with a 68-yard touchdown down the seam on the second play of the day.

After an exchange of punts, Nevada (2-1) tied the score on a 1-yard touchdown run by Devonte Lee. The touchdown was set up by a 55-yard completion from Carson Strong to Romeo Doubs that put the ball at the K-State 2. It took four plays for the Wolf Pack to punch it in.

K-State responded with a more typical drive, capped by a 22-yard touchdown run by Joe Ervin. The Wildcats went 75 yards in eight plays, five on the ground and three through the air.

The Wildcats extended the lead to 17-7 with 2:08 left in the first half. The 38-yard drive was set up by a Tee Denson interception that was returned to near midfield.

K-State’s defense was the story in the first half. The Wolf Pack came into the game averaging 479.5 yards of total offense per game, had just 142 in the half.

Nevada opened the second half with a field goal to cut the deficit to 17-10. The Wolf Pack was driving deep into K-State territory, but head coach Jay Norvell was called for an unsportsmanlike conduct penalty that stalled the drive. 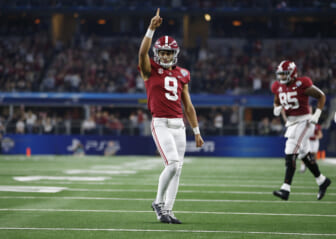 After a three-and-out and a shanked punt, Nevada took over at the K-State 42-yard line. The Wolf Pack used nine plays to tie the score, capped by a 14-yard touchdown pass from Strong to Elijah Cooks.

Vaughn put the Wildcats back up 24-17 on the first play of the fourth quarter. The Cats drove 75 yards in eight plays (six of them runs).

The K-State defense held Nevada on a fourth-and-4, stopping Strong after a gain of three yards. That set up an 11-play drive that was capped by Howard’s 2-yard run. Howard’s 1-yard TD run capped the scoring with 1:12 left.