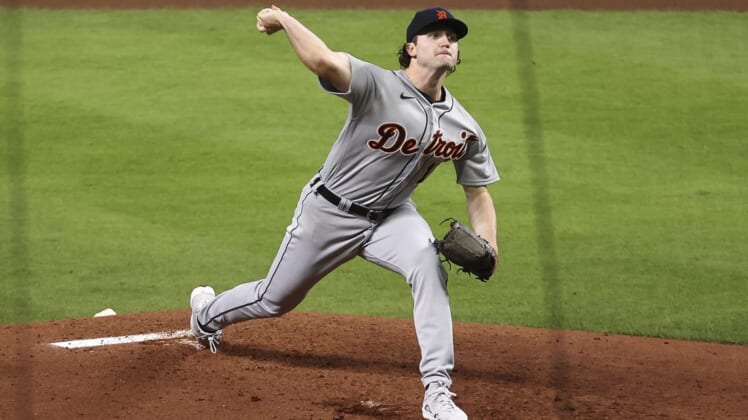 Mize (1-0), the No. 1 overall pick in the 2018 draft, was making his ninth career start and second this season. He allowed four hits and two walks while striking out five.

Tigers manager AJ Hinch had a victorious return to Houston, where he managed from 2015-19. Hinch was fired in January 2020 in the aftermath of the team’s sign-stealing scandal.

The Tigers loaded the bases with two outs in the first but Greinke struck out Jonathan Schoop to escape the jam.

Greinke wasn’t so fortunate in the second. Nunez led off with a double, and Greiner drilled a one-out homer to right.

Houston stranded two runners in each of the first two innings.

Detroit doubled its lead in the third. Greinke retired the first two batters before Nunez ripped a homer just inside the left field foul pole. Baddoo then crushed a 430-foot shot to center to make it 4-0, with both solo shots coming on the first pitch of the at-bat.

The Tigers tacked on two more runs in the fifth. Nomar Mazara and Schoop singled and advanced on a groundout. Baddoo lined a sacrifice fly to right, and Greiner smacked an RBI single to left.

Mize settled in after his shaky start, setting down 10 of the last 11 batters he faced. He punctuated his breakthrough performance by striking out Martin Maldonado with a runner on third to finish the seventh.

In the eighth, Brantley ended Detroit’s shutout bid during a nine-pitch at-bat against Buck Farmer. He clobbered a fastball into the upper deck in right field.

Correa homered off Jose Cisnero in the ninth.