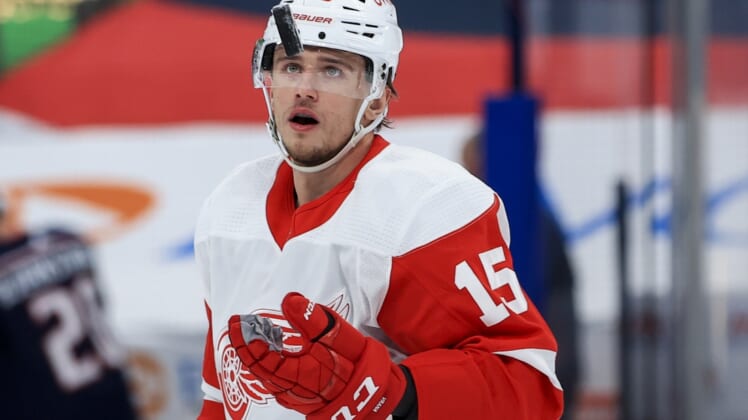 May 8, 2021; Columbus, Ohio, USA; Detroit Red Wings left wing Jakub Vrana (15) flips the puck in the air during a stop in play against the Columbus Blue Jackets in the 1st period at Nationwide Arena. Mandatory Credit: Aaron Doster-USA TODAY Sports

Detroit forward Jakub Vrana will undergo shoulder surgery and miss at least four months of his first full season with the Red Wings.

The Red Wings acquired Vrana from Washington in the April deadline deal that sent Anthony Mantha to the Capitals. He then signed a three-year deal worth $15.75 million in early August.

Vrana was injured 10 minutes into his first practice at training camp with the Red Wings. It’s unclear how he was hurt.

Vrana, 25, rewarded Detroit almost immediately by posting a four-goal outburst on April 22, his fourth game for the franchise. He finished the season with 19 goals and 17 assists in 50 games split between Washington and Detroit.

A native of the Czech Republic, Vrana was the 13th overall draft choice in 2014 and spent his first four-plus NHL campaigns with the Capitals, winning the Stanley Cup with them in 2018. In 295 career games, Vrana has tallied 168 points (84 goals, 84 assists) with 21 game-winning goals.

Vrana figures to be part of a larger rebuilding project for the Red Wings, an Original Six franchise with plenty of history that has not reached the Stanley Cup Playoffs since 2016. In addition to Vrana, the Red Wings acquired forward Richard Panik, a 2021 first-round draft pick and a 2022 second-round pick in their April deal with the Capitals.