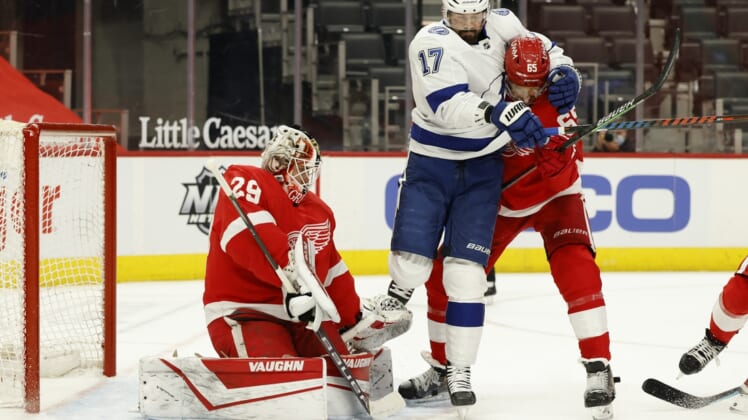 Sam Gagner scored in the eighth round of a shootout to give the Detroit Red Wings a 1-0 home win over the Tampa Bay Lightning on Saturday.

Tampa Bay outshot Detroit in regulation and overtime, 33-15, but couldn’t put anything past Detroit goalie Thomas Greiss, who recorded his second consecutive shutout.

Tampa Bay started backup goalie Curtis McElhinney, who made 15 saves in what was his first start since April 22 and 11th of the season.

Ross Colton of Tampa Bay scored to start the shootout, but Jakub Vrana of the Red Wings answered in the first round to tie the shootout at 1-1.

However, Valtteri Filppula of Detroit scored to force an eighth round.

The Lightning thought they had taken the lead with 9:23 left in the third period on a goal off of a point shot by Ryan McDonagh, but following a challenge by the Red Wings, it was called back due to goalie interference.

Odrej Palat was ruled to have bumped with Greiss and threw him out of position as the puck sailed into the net.

The Lightning saw a four-game winning streak end, while the Red Wings snapped a three-game losing streak despite failing to score a goal in regulation for the second time in three games.