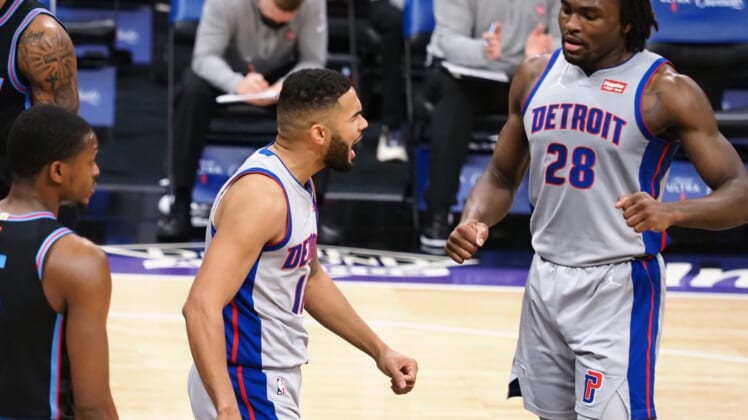 Isaiah Stewart recorded 16 points and a game-high 13 rebounds for Detroit, which has alternated losses and wins over the past eight games. Sacramento took its fifth straight loss.

The Pistons capitalized on a poor shooting night from the Kings, who finished 7 of 30 (23.3 percent) from beyond the 3-point arc. Detroit built a big first-half lead that gave it a cushion down the stretch.

Seven Pistons scored in double figures, including three off the bench. Rookie reserve Killian Hayes posted a career-high 11 points. Jahlil Okafor scored 11 points and hit all four of his foul shots, helping Detroit’s 17-of-20 success from the line as a team.

De’Aaron Fox finished with 23 points, nine rebounds and seven assists for Sacramento, but he shot 0 of 5 from 3-point range. Buddy Hield scored all 15 of his points from beyond the arc, going 5 of 12 from long distance.

A 10-0 run late in the second quarter helped the Pistons open a 20-point lead, and Detroit was on top by 18 at halftime.

The Kings trimmed the deficit to seven points with 2:01 remaining in the contest, but back-to-back Joseph baskets ignited a game-ending, 8-3 Detroit run.

Sacramento fell 2 1/2 games behind the Golden State Warriors for the No. 10 spot in the Western Conference, the final place in the postseason play-in tournament.