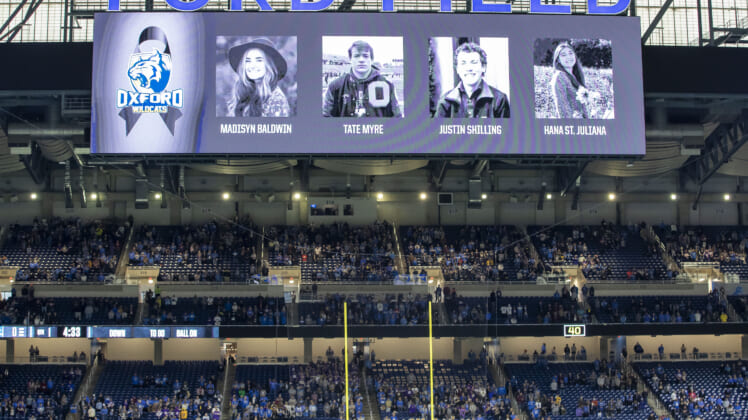 At 0-10-1 on the season heading into Sunday’s home outing against the Minnesota Vikings, there was much more on the minds of the Detroit Lions.

Just days before, four a 15-year-old student at Oxford High School in suburban Detroit opened fire and killed for classmates.

It was the latest senseless mass shooting to impact a high school in the United States, and brought to the forefront old wounds that have scarred this nation. Said school is about 51 minutes from Detroit, and impacted the community in a big way.

On the field, the Detroit Lions were able to pull off their first victory of the season. It came on a walk-off touchdown pass from Jared Goff in front of long-downtrodden Lions fans.

While a sport doesn’t even compare to the tragic events that occurred at the high school, Lions head coach Dan Campbell took time post-game to show his respects to those impacted by the violence. In the process, he gave the Oxford community as a whole the game ball.

Goff himself also touched on how much it meant to play this game for the Oxford High School.

Professional sports teams are a large part of their local communities. Players donate both time and money to help those in need. And sometimes, a game can act as an outlet for a larger community that is dealing with tragedy. This is just the latest example of that.

As for the shooting itself, a kid by the name of Ethan Crumbley is accused of killing four of his classmates wth a gun that his father allegedly purchased the week before. He’s being held on $500,000 bond. As for Crumbley’s parents they have each been charged with four counts of involuntary manslaughter.