Detroit Lions coach Dan Campbell declined to speak Friday about “rumors” that running back D’Andre Swift is under investigation in a homicide case in Philadelphia.

When asked if Swift was being investigated, Campbell responded, “Not to my knowledge.”

NFL Network reported Friday that its “extensive reporting on the situation” over the past two days hasn’t turned up any indication that Swift is under investigation. While police in Philadelphia declined to comment, sources reiterated Swift was not a suspect in the open homicide case, per the network. 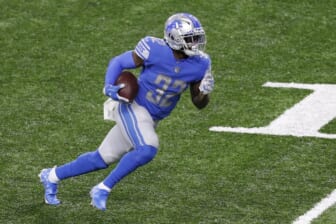 The Lions selected Swift, who played in college at Georgia, in the second round (No. 35 overall) of the 2020 NFL Draft. As a rookie, he gained 878 yards from scrimmage and scored 10 touchdowns in 13 games (four starts).

Now 22, the 5-8 Swift is from Philadelphia. He played at St. Joseph’s Preparatory School, where he was a five-star prospect in the Class of 2017.