Despite Week 2 Result, Raiders Defense is Getting Better 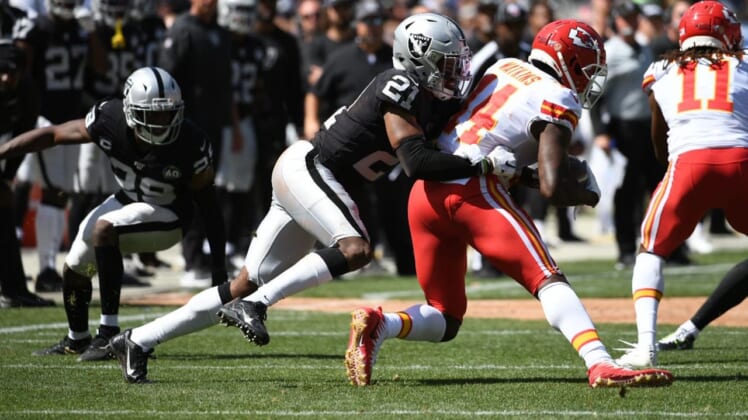 Despite running into the buzzsaw that is Patrick Mahomes and the Kansas City Chiefs, the Raiders defense continues to build and get better.

At halftime of the Raiders 28-10 loss to the Kansas City Chiefs on Sunday, it may have seemed impossible to find positives when talking about the team’s revamped defense. After all, the unit had just given up 278 yards in the whirlwind that was the second quarter.

The Raiders now rank fifth in the NFL in defense against the run, giving up an average of 63 yards per game through Week 2. It’s early, but run defense was another area the Raiders struggled with last season surrendering 140 yards per game during their 4-12 campaign.

At yesterday’s weekly press conference, coach Jon Gruden acknowledged the improvement saying his team did perform well – in spots – against the high-powered Chiefs.

“I think we’re getting better. We have some more speed. I thought we made some great one-on-one tackles yesterday,” a blurry-eyed Gruden said. “That’s the thing about the Chiefs – as I said earlier in the week, they make you defend every blade of grass. Laterally, with the RPOs and jet sweep threats, and vertically. This kid Mahomes can drop bombs on you from all over the field.

The Raiders have built their defensive front dramatically over the past two drafts and it’s starting to pay off. 2019 first-rounder Clelin Ferrell, rookie Maxx Crosby, 2018 picks Maurice Hurst and PJ Hall, free-agent veterans Benson Mayowa and Josh Mauro, all have continued to cause disruption including notching 4.5 sacks in two games. The Raiders tallied just 13 sacks in all of 2018.

I think we’re getting better. We have some more speed. I thought we made some great one-on-one tackles yesterday. – Jon Gruden on Raiders defense

Arden Key, also a 2018 draft class selection, continues to develop but at a slower pace than some expected, including his coach.

“We gotta get more out of Arden,” Gruden said. “I’ve said that for long enough. Arden, if you’re listening, we gotta get you going. He’s a good player. He’s had a good training camp. He’s healthy. Arden’s going to get home, he’s going to take off here. Hopefully soon.”

Part of the plan against Kansas City was to slow down reigning NFL MVP Mahomes. Gruden said the way it unfolded, his defensive front faced an uphill battle.

“We put our defensive line in some tough spots to try and stop their running game,” Gruden said. “That did stymie the guys ability to rush the passer.”

With the day Mahomes put up against Oakland on Sunday, it’s easy to pick on the Raiders defensive backfield. Third-year cornerback Gareon Conley was touched up several times but also was the victim of Mahomes’ accuracy. Conley was beaten on one long touchdown even though he couldn’t have played tighter coverage.

Veteran slot corner Lamarcus Joyner, one of the team’s big additions in the offseason, acknowledge some of his unit’s deficiencies on Sunday but said, overall, he likes how he and his teammates are playing and the mistakes on Sunday are easily fixed with hard work.

“You show me a play where they just physically dominated us to score a touchdown or beat us single-handily – hats off to them,” Joyner said on Monday. “I think outside those miscommunications and technical errors, that’s an easy fix once we master it and perfect it in practice.”

Despite rumors swirling about the availability of Pro Bowl cornerback Jalen Ramsey, who has demanded a trade out of Jacksonville, the Raiders current group knows the team has improved up front to pressure the passer. According to Joyner, they know they need to pick up their game so the Raiders defense can have the balance it needs to put the team in a position to win games.

“We just have to master out technique and fundamentals in practice knowing we can hang our hats on the d-line and linebackers stopping the run so games are going to be on us,” Joyner added.

The Raiders defense may not always look like it’s ready for prime time, yet the improvement is clearly visible and the speed, talent, and effort are light years ahead of the 2018 team.