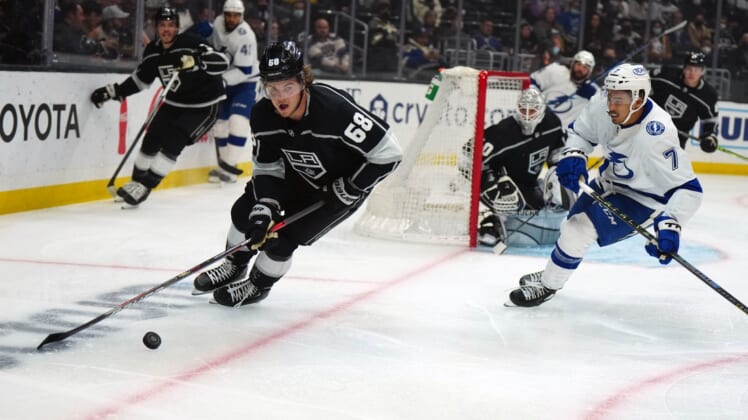 Victor Hedman had two goals and an assist for the short-handed Tampa Bay Lightning, who earned a 6-4 win over the host Los Angeles Kings on Tuesday night.

Nikita Kucherov, Mathieu Joseph and Steven Stamkos each had a goal and assist, Pierre-Edouard Bellemare also scored and Andrei Vasilevskiy made 32 saves for the Lightning.

Tampa Bay played the game with just four defensemen because of injuries but still won for the sixth time in the past seven games.

Blake Lizotte, Alex Iafallo, Arthur Kaliyev and Phillip Danault scored while Cal Petersen made 19 saves for the Kings, who have dropped two in a row after a four-game winning streak.

The game was tied 3-3 after two periods. Just past the midpoint of the third, the Lightning won the puck along the boards and got it to Hedman alone in the high slot. He skated in and beat Petersen with a wrist shot at 10:43.

Hedman scored on a breakaway after a pass back to the blue line got past Olli Maatta, giving the Lightning a 1-0 lead at 13:17 of the first period.

Lizotte stole the puck from Brayden Point in the Tampa Bay zone and scored up high from in close on Vasilevskiy to tie it 1-1 at 8:52 of the second.

Iafallo also stole the puck from Tampa Bay in its own zone and scored short-handed for a 2-1 lead at 11:44 of the middle period.

Kucherov answered on the same power play with a one-timer from the right circle off a pass from Hedman to tie it 2-2 at 13:03.

Bellemare then scored short-handed to put the Lightning back in front 3-2 at 14:40.

Tampa Bay defensemen Zach Bogosian, Jan Rutta and Erik Cernak sat out with injuries, but the Lightning could not use their taxi squad because it’s designed to replace players in COVID-19 protocol.