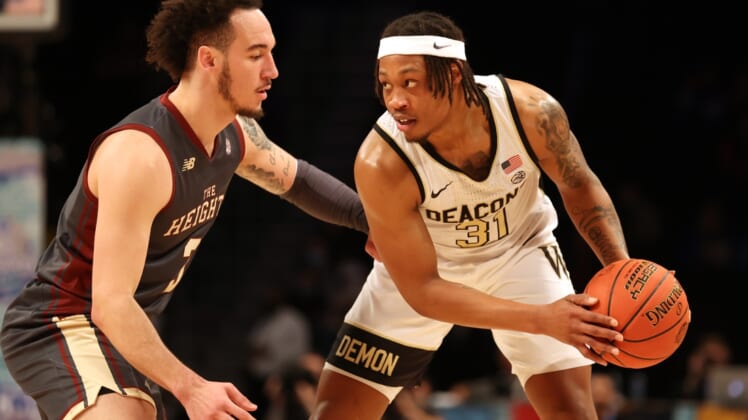 Despite a historic season — and being armed with the Atlantic Coast Conference’s Player and Coach of the Year — Wake Forest was left out when the NCAA Tournament bracket was released Sunday night.

But the Demon Deacons are not done playing. Steve Forbes’ side will compete in the National Invitation Tournament as a No. 2 seed and host Towson on Wednesday night in Winston-Salem, N.C.

Unfortunately for Wake Forest (23-9), a fifth-place finish in the ACC wasn’t good enough to make the NCAA Tournament. Since 2010, the Deacs have gone dancing just once, losing in the First Four in 2017.

“I think we are one of the best 68 teams in the country for sure,” Forbes told the Winston-Salem Journal last week. “But I’m not in the room. And the narrative for our league is not very good.”

Just five ACC teams cracked the NCAA Tournament field this year. The Deacs were not one of them, despite finishing with 13 ACC wins, their most since 2005, and being the third-highest ACC team in the NET rankings. So Wake is on to the NIT, where its seven seniors will have the chance to keep playing.

“They are a wonderful group of young men who have reinvigorated our fan base by representing Wake Forest in an exemplary manner, on and off the court,” Forbes said.

Up first in the 32-team bracket for Wake Forest is Towson (25-8), which won the Colonial Athletic Association’s regular season title. The Tigers were ousted in the semifinals of the conference tournament by rival Delaware.

This will be Towson’s first trip to the NIT, and only its second postseason tournament appearance since 1991. The Tigers played in the now-defunct Vegas 16 in 2016.

“I’m sure the guys are disappointed,” Towson coach Pat Skerry told the Baltimore Sun after falling to Delaware. “We’ll try to regroup and make a run at it. Hopefully, we’ll get a big-name school on TV and see what we can do.”

The Tigers got just that. They’ll face an ACC side in a game that will air on ESPN+.

Towson will have its hands full with Wake guard Alondes Williams, who led the ACC in scoring and passing with 19.2 points and 5.2 assists per game on his way to claiming the ACC’s Player of the Year award — the first Deac to win it since Josh Howard in 2003.

The Tigers are armed with a trio of players averaging double-digits in scoring: Nicolas Timberlake (14.5), Cameron Holden (13.7) and Charles Thompson (10.7). Holden and Timberlake were each voted to the All-CAA First Team.