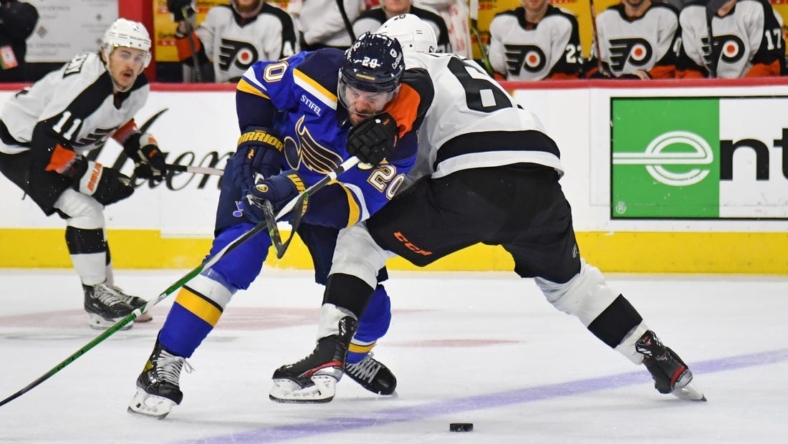 The reeling St. Louis Blues are desperately searching for the way out of their worst slump in franchise history.

After winning their first three games this season, the Blues have suffered a team-record eight straight regulation losses ahead of their home game against the San Jose Sharks Thursday at Enterprise Center.

St. Louis is averaging an NHL-worst 2.09 goals scored per game. The Blues entered Wednesday with the fifth-worst penalty-killing rate (70.8 percent) in the league as goaltenders Jordan Binnington and Thomas Greiss have combined for the fourth-most goals allowed per game (3.91).

“It’s not just one thing,” Blues coach Craig Berube told reporters after his team lost 5-1 in Philadelphia Tuesday. “I think it’s a combination of things. You gotta play real good hockey to get out of this, and you gotta do it together and you gotta be competitive. Highly competitive.

“When things aren’t going right, it’s easy to not be as competitive, and right now I think that’s where we’re at.”

Blues captain Ryan O’Reilly told the St. Louis Post-Dispatch that mounting frustration has been dragging the team down.

“It seems like every puck, every 50-50 puck, it’s bouncing (the other) way,” said O’Reilly, who has just two goals, no assists and a minus-12 plus-minus rating through 11 games. “It’s frustrating. It’s definitely a massive issue.

“No question, I think guys are working. But it’s not always good enough. For myself, it’s not good enough. Trying to work, I’m not there for my teammates. My timing’s terrible … I’m supposed to lead this team, and I’m not doing nearly enough. I know (it’s) other guys, too. There’s a lot more that needs to be done. I don’t have an answer for you now. I know what I’m doing isn’t working.”

The Sharks will come to town with a four-game winless streak, albeit with three consecutive shootout loss points earned during that span.

“It’s very disheartening because of the result,” Sharks coach David Quinn said after his team’s 5-4 shootout loss to the Anaheim Ducks on Saturday. “We continue to feel like we’re going in the right direction, but we shoot ourselves in the foot, and we did again today.”

San Jose went 1-2-3 on its recent six-game homestand before heading to St. Louis to start a four-game road trip.

“It doesn’t matter how you lose, it’s really tough,” Sharks center Tomas Hertl told NHL.com after the Ducks loss. “It seems like every mistake went in our net. It’s really tough because all of these home games have been so close against all of the teams that we played, and we have just a couple of points.”