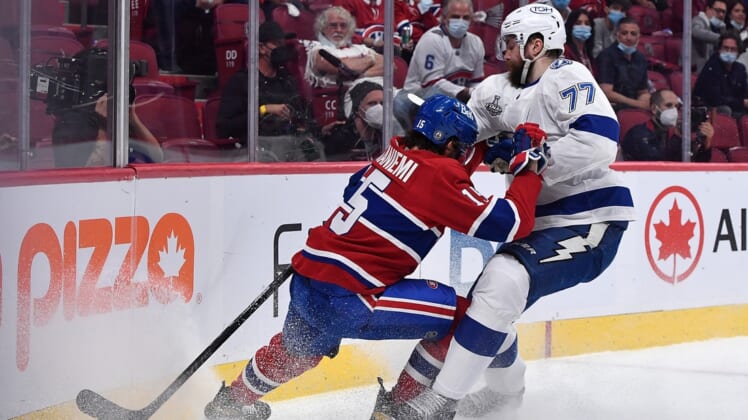 Hoping to stave off a sweep in the Stanley Cup Finals, the Montreal Canadiens will make multiple line changes, including a scratch of center Jesperi Kotkaniemi in advance of Game 4 on Monday.

Also sitting for the home game will be defensemen Jon Merrill and Erik Gustafsson.

In an attempt to get more speed into the lineup, the 20-year-old Kotkaniemi will be replaced by Jake Evans, who has not seen any action since he saw 12 minutes in Game 1 last Monday. 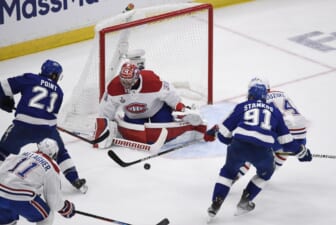 Kotkaniemi has eight points (five goals, three assists) in 19 Canadiens playoff games, but has just one assist and no goals in the Stanley Cup Finals.

“I took the time to sit down with him and explain,” Canadiens head coach Dominique Ducharme said. “… It’s not a punishment. Every player wants to play, wants to be on the ice. That’s normal. We have 28 guys right now and they all want to be on the ice. That we all understand. It’s just a matter of options that we have in the team and what we want to achieve.”

Also returning to the ice for Montreal will be defensemen Brett Kulak and Alexander Romanov, who have not seen action since Game 1 of the third-round series against the Vegas Golden Knights.

In addition, the Canadiens will have Tyler Toffoli, Josh Anderson and Artturi Lehkonen all skating on different lines for Game 4. Toffoli, in his first season with the Canadiens, will move to the top line with Phillip Danault and Brendan Gallagher.

The Lightning have cruised to a 3-0 series lead in search of their second-consecutive Stanley Cup title, outscoring the Canadiens 14-5 in the three games so far. They aren’t without their concerns, though, as forward Alex Killorn is a game-time decision with a foot injury.