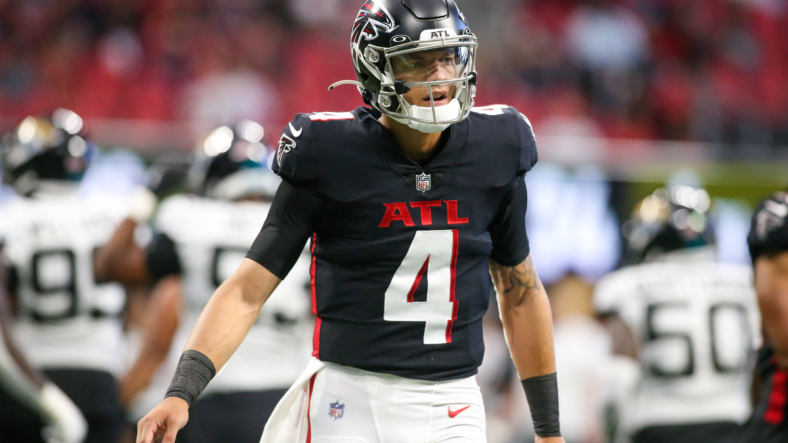 The Atlanta Falcons were involved in the Deshaun Watson trade discussions back in March. Obviously, they didn’t get picked by the now-Cleveland Browns quarterback, so they turned to an old friend of head coach Arthur Smith’s by signing Marcus Mariota to a two-year $18.7 million contract. They also drafted Desmond Ridder out of Cincinnati in the third round with the 74th pick in April’s NFL Draft.

While the familiar connection between Smith and Mariota undoubtedly has given the eight-year pro the leg-up in the competition, Ridder’s untapped and unknown potential lurks in the background.

Especially if the Falcons can’t turn around their recent string of bad luck. Having missed the playoffs each year since 2017, the Falcons, Smith was hired to turn this franchise back around. In his first year at the helm, the Falcons went from a 4-12 squad to a team that went 7-10. That’s a solid improvement.

But now they face the task of trying to sneak their way into the postseason, looking to improve upon last season’s effort. Only, now they have to do so without their former MVP Matt Ryan. Needless to say, there’s a lot of pressure, not only on Smith as he enters his second season as an NFL head coach but also on their starting quarterback, Mariota.

Having already started the season 0-1, after losing to their NFC South rival New Orleans Saints, the Falcons now have to play the reigning Super Bowl champion Los Angeles Rams in Week 2.

Basically, the schedule doesn’t get any easier, not until Week 3, when a battle against the Seattle Seahawks, who were quite impressive in beating Russell Wilson’s Denver Broncos in their first game. Maybe the Seahawks aren’t as bad as we think? If so, the Falcons could have a tough start to their season. This could even lead to Ridder entering the starting lineup, and according to one local Falcons beat reporter, it’s a strong possibility at some point this season.

Related: Top 2022-23 NFL Rookie of the Year candidates: Travon Walker rises to the top of the crop

Mark Bradley of The Atlanta Journal-Constitution points out that the Falcons can walk away from Mariota’s two-year contract with ease, paying the QB just $6.75 million if they choose to release or trade him prior to the start (actually by the fifth day) of the 2023 league year. Doing so would save Atlanta $12 million on their 2023 salary cap sheet.

Of course, it all depends on how Mariota quickly acclimates himself within the Falcons offense, yet expectations for the team as a whole are already exceedingly low. Preseason betting odds set Atlanta’s over/under win total at just 4.5 games out of 17 chances to win.

With one loss under their belt already, facing the Rams, Seahawks, Browns, Buccaneers, 49ers, then the Bengals, the Falcons have a lot of tough opponents just in the early portion of their schedule. So it’s not that hard to envision a scenario where the Falcons are at the bottom of the NFC South, with no way to claw toward the top this season.

If the Falcons find themselves behind the eight-ball, why shouldn’t they turn to their rookie, Ridder, just to see what he can offer before they’re faced with potentially selecting another highly-touted QB prospect once again in next year’s draft? Alabama’s Bryce Young and Ohio State’s C.J. Stroud are intriguing, but what if they didn’t have to spend a top-10 pick on a quarterback once again? What if the future face of the franchise is already on the roster, waiting in the wings?

That’s a question the Falcons front office has to try and start finding the answer to as soon as they feel he’s ready to be tested by the pros. Mariota held his own in Week 1, but a loss is a loss, and Ridder happens to have the third-best winning percentage in college football history. Can he do the same in the pros?