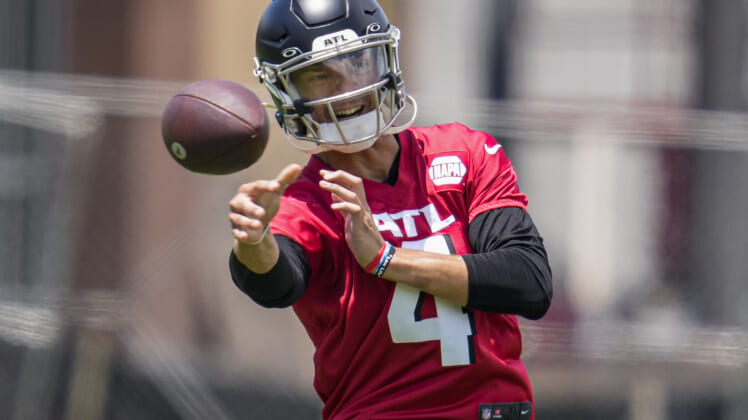 The Atlanta Falcons happily drafted quarterback Desmond Ridder with the 74th overall pick in the 2022 NFL Draft, believing he could challenge Marcus Mariota for the starting job. While Mariota remains the favorite to take the field in Week 1, it’s not a foregone conclusion.

Those highest on Ridder before the NFL Draft believed he offered the most pro-ready tools among his peers. A four-year starter with the Cincinnati Bearcats, the 6-foot-4 quarterback consistently displayed the ability to handle pressure and make smart reads both pre- and post-snap.

While the 22-year-old quarterback didn’t offer as much upside as Malik Willis and he was drafted much later than Kenny Pickett, there will be an opportunity for him to make his first NFL start before either of them this season.

Josh Kendall of The Athletic reported out of Atlanta that it sounds like Ridder is “going to make a competition out of it” with Mariota. This came just weeks after Daniel Flick of Sports Illustrated wrote that it “seems like a matter of when, not if” the rookie quarterback starts in Atlanta.

Earning that level of praise says a lot about Ridder mentally. It’s also a big part of the reason why there is a realistic chance he starts more games in 2022 than Mariota. Atlanta isn’t keeping Mariota past this season, but there is an opportunity for Ridder to prove himself as a quarterback worth keeping.

It’s the exact scenario the Falcons are hoping unfolds. Finishing with a top-five pick in a season with Ridder showing the qualities of a long-term starter creates flexibility. In the 2023 NFL Draft, Atlanta could snag edge rusher Will Anderson Jr or wide receiver Jaxon Smith-Njigba, strengthening a core to build around.

Related: Evaluating the Desmond Ridder pick by the Atlanta Falcons

While the Falcons’ offensive line isn’t ideal for a rookie quarterback, operating in an Arthur Smith offense with tight end Kyle Pitts and receiver Drake London would allow for a proper evaluation of Ridder to be done in 2022.