Desmond Bane leads Grizzlies over Rockets with Ja Morant out 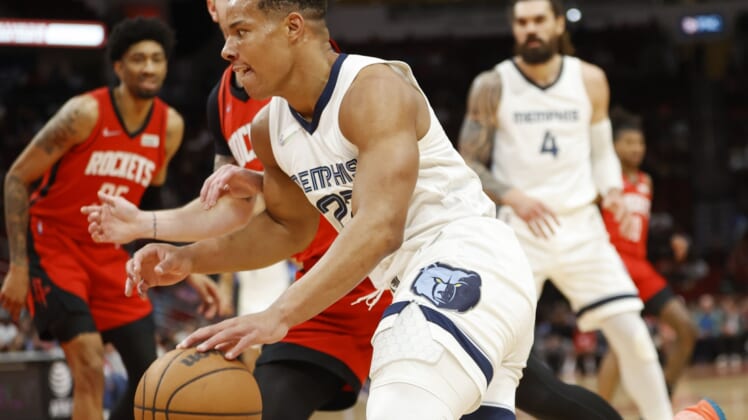 Desmond Bane and Dillon Brooks combined for 44 points as the Memphis Grizzlies rolled to a 122-98 road victory over the Houston Rockets on Sunday despite the absence of Ja Morant.

The Grizzlies took turns torching Houston, with Bane running the first leg with eight points and two assists in the opening period. Bane was at ease orchestrating the Morant-less offense, and he found support offensively when Ziaire Williams posted eight points off the bench in the first.

When Bane scored in transition following a Brandon Clarke steal, the Grizzlies opened their largest lead of the first half at 39-25 at the 8:36 mark of the second quarter. Houston responded with a 14-4 run capped by a pair of Josh Christopher free throws — only for the Grizzlies to counter behind Tyus Jones, who produced a three-point play, a 3-pointer and an assist on a Williams alley-oop dunk. Jones drilled a three with 1.6 seconds left in the half as the Grizzlies led 56-44.

Brooks and Melton shared the scoring load in the third quarter, combining for 18 points on 6-of-7 shooting in the period. Brooks was hot early, but when the Rockets sliced what was once a 17-point deficit to 71-64 on back-to-back dunks from Jae’Sean Tate and Sengun, Melton nailed a trio of 3-pointers down the stretch of the period that enabled the Grizzlies to reclaim control.

Memphis delivered the knockout blow early in the fourth by way of a 15-0 run that stretched its advantage to 99-73. Jaren Jackson Jr. and Brooks combined for three 3-pointers during the surge while Clarke added a pair of baskets in the paint.