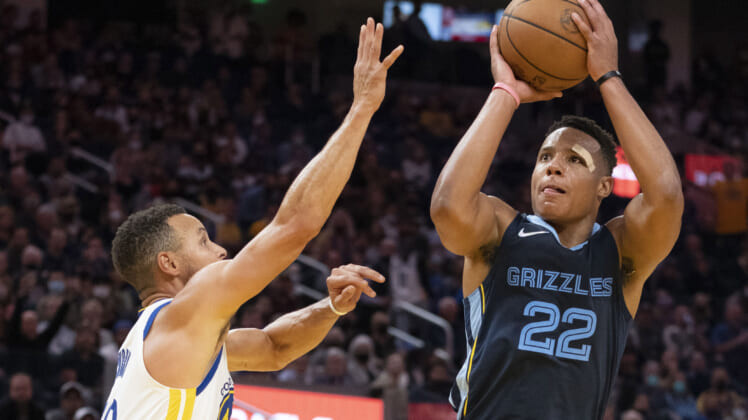 There are several skills needed to become a good basketball player. For Memphis Grizzlies star Desmond Bane, it’s all about his ability to stroke the three. Or at least, that’s his best trait thus far.

Still in just his second season after being selected 30th in the 2020 NBA Draft, Bane has quickly developed a reputation for having one of the best shots in basketball. Specifically, it’s his efficiency from three-point range.

At just 23 years old, Bane already feels he’s among the very best three-point shooters in basketball. When asked if there are any players who can compare to his efficiency, Bane had a short list.

How do Bane and Curry compare?

Bane had the second-best three-point percentage in the NBA this past season, behind only Luke Kennard of the Los Angeles Clippers, who connected on .449% of his shots from distance.

Stephen Curry, who many would regard as the G.O.A.T. shooter, ranked 58th in the NBA, shooting .380% from three. Though, to be fair, Curry did finish with the most three-point makes, with 285, where Bane finished 10th with 228 made.

Though Curry has never finished a season as the leader in three-point percentage, he’s topped the list in makes seven times, which is likely why he’s the league’s all-time leader in made threes as well.

Bane has a long way to go if he wants to overtake Curry, but for now, it’s hard to argue any others being better than the second-year pro out of TCU. It’s a scary thought as he continues to improve his craft. With the Grizzlies reaching the second round of the NBA Playoffs so far, who knows how much further Bane’s game can take them.