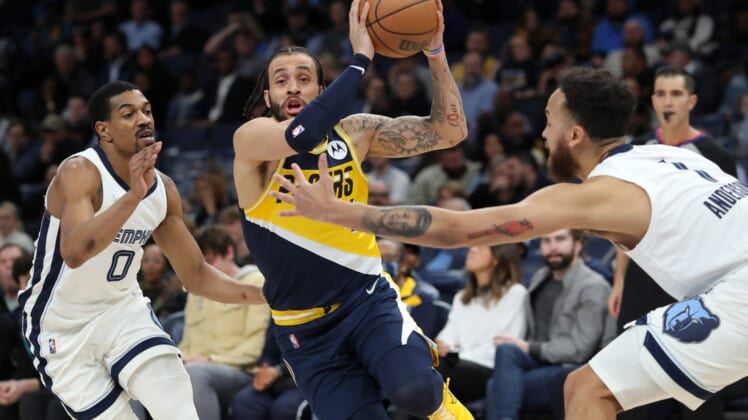 Desmond Bane scored 23 of his 30 points in the first half to fuel the host Memphis Grizzlies to a 133-103 victory over the Indiana Pacers on Thursday.

Memphis improved to 16-2 this season playing without All-Star Ja Morant, who missed his third straight game due to a sore right knee. The Grizzlies said prior to the game that Morant will be re-evaluated in two weeks.

Jaren Jackson Jr. scored 20 points to lift the Grizzlies to their third straight win and seventh in their last eight games. De’Anthony Melton made five 3-pointers and finished with 19 points, while John Konchar added 18 points in the rout.

Lance Stephenson scored 25 points in 23 minutes off the bench for the Pacers (25-49), who lost for the seventh time in 10 games. Stephenson made 10 of 15 shots, including all five from 3-point range.

Indiana assistant coach Lloyd Pierce guided the team in place of head coach Rick Carlisle, who missed the game due to personal reasons. Carlisle will also sit out the Pacers’ road game versus the Toronto Raptors on Saturday.

Bane sank a pair of 3-pointers and Tyus Jones made one of his own to push Memphis’ lead to 23-6 with 6:44 remaining in the first quarter. Bane added his third 3-pointer of the quarter with 1:11 to play before his tip-in with 4.5 seconds left gave the Grizzlies a 44-23 advantage.

Bane drained two 3-pointers in the second quarter before adding a midrange jumper with 15.2 seconds left, sending Memphis to a 74-48 lead at halftime.

The Grizzlies scored the first 10 points of the third quarter to essentially put the game away.