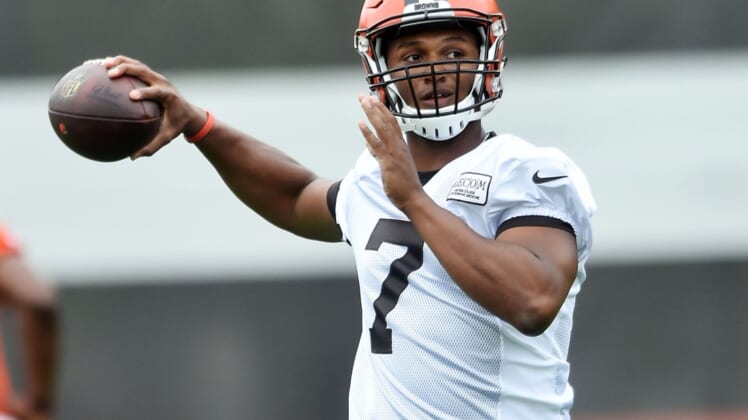 The Cleveland Browns’ quarterback competition this summer is going to be spicy, and rookie DeShone Kizer has a chance to win the job.

Mary Kay Cabot of Cleveland.com noted that, right now, shockingly Brock Osweiler might have the edge due to his experience and big arm. However, Cody Kessler is definitely still in the mix, and Kizer most certainly is as well.

“I think Kizer will give the other top quarterbacks, Cody Kessler and Brock Osweiler, a run for their money in this open competition,” Cabot writes. “He’s coming up the learning curve quickly and has all of the physical skills Jackson likes in a quarterback, including size, mobility, and arm strength. He still has a long way to go in terms of learning a pro playbook and reading defenses, but if he continues at his current clip, he’ll have at least a chance to start on opening day.”

Cabot concludes by saying it might essentially come down to whether the Browns are willing to let the rookie swim in the deep end of the pool right away. Head coach Hue Jackson has already been effusive with his praise regarding the former Notre Dame star. He even likened DeShone Kizer to Ben Roethlisberger recently.

That said, the Browns have said they aren’t in any rush to get Kizer onto the field as a rookie.

Still, this is a team that isn’t dealing with high expectations in 2017. Nobody would bat an eyelash around the league if Cleveland finishes among the NFL’s worst at the end of the year. It could behoove the organization to let Kizer get as much experience as possible without the pressure of needing to win right away.

There are different schools of thought on this. Some organizations prefer to keep their young passers on the sidelines to learn from afar while others opt to let them learn by playing. It’s going to be fascinating to see what Cleveland — a franchise that hasn’t had a franchise passer in decades — does going forward with Kizer.