It sounds like Houston Texans quarterback Deshaun Watson is getting the Robert Griffin III treatment.

Texans head coach David Culley proclaimed to the public on Wednesday that Watson, because he missed the offseason program leading into training camp, was anointed the fourth-string quarterback and played safety on defense, per Brian T. Smith of the Houston Chronicle:

One can’t help but be reminded of RG3’s situation in Washington during the 2015 campaign, when he was relegated to scout team safety duties as Kirk Cousins and Colt McCoy eclipsed him on the QB depth chart.

Granted, the circumstances in Houston surrounding Watson are quite different, but the similarities between how the young signal-callers were deployed in practice was too eerie not to make humorous note of.

What isn’t funny is the off-field scandal Watson is facing amid a series of lawsuits that allege sexual misconduct. The NFL released a statement, though, saying Watson isn’t limited from football activities while the league continues its investigation into Watson’s alleged lewd behavior.

Another huge difference between Watson and Griffin is the fact that, you know, Watson can actually throw a football at an elite level. He just led the NFL in passing yards in 2020 and was the lone on-field bright spot for an awful Texans team that went 4-12. 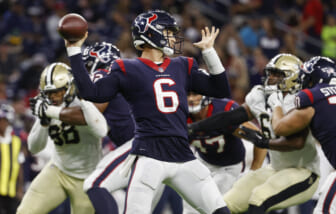 It’s quite possible Houston has the league’s worst roster entering the 2021 season, and it’ll get worse whenever Watson’s trade demand is fulfilled. Obviously, his severe demotion was done in part out of spite, since his presence at Texans training camp is a distraction as Culley and his staff try to change the organization’s toxic culture that Watson is attempting to break away from.

Just another unforeseeable, crazy twist in what’s already been a wild NFL offseason. Meanwhile, Houston is expected to role with veteran journeyman QB Tyrod Taylor as its Week 1 starter, with Stanford rookie Davis Mills competing with Jeff Driskel for the backup job.