A lot has been made recently about the Cleveland Browns’ decision to trade for Deshaun Watson while the quarterback is mired in 22 civil cases claiming sexual misconduct.

The team has been under a microscope since with a hastily planned introductory press conference and a statement about an internal investigation into the allegations that doesn’t necessarily check out.

Watson is now speaking out further, courtesy of the Browns’ media team. In said interview, the multi-time Pro Bowler told fans in Cleveland that they are getting a first-class quarterback.

Deshaun Watson on what Browns fans can expect

Related: What the Cleveland Browns can expect from Deshaun Watson

Watson’s comments come one day after one of the despositions in his civil cases was leaked to the public. In said deposition, Watson faced questions from the attorney of those accusing him of sexual assault and sexual misconduct.

It was a pretty bad look for the star quarterback, including gaps in his story involving a social media post indicating he was in New Yor City at a time when he was allegedly getting a massage from one of the accusers in Texas.

It was also earlier in the week that NFL Commissioner Roger Goodell noted that a suspension still remains on the table with no timetable for a decision as the league’s investigation into the allegations continues.

The league also released a statement on a potential Watson suspension immediately after the blockbuster trade that sent him to Cleveland. 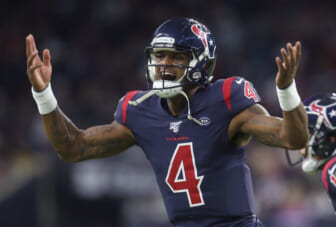 Also Read:
Deshaun Watson could eventually become the Trevor Bauer of the NFL

“Any transaction would have no effect on the NFL’s ongoing and comprehensive investigation of the serious allegations against Deshaun Watson. Nor would it affect his status under the Collective Bargaining Agreement and the Personal Conduct Policy.

If the league’s investigation determines that Watson violated the Personal Conduct Policy, discipline may be imposed pursuant to the policy and the CBA.”

All of this comes with the Browns in hot water around league circles for handing Watson the largest guaranteed contract in NFL history. For someone in the situation that he’s in right now to get $230 million in cold hard cash. Well, it’s not necessarily a great look for the league and its teams.

“I don’t know that he should’ve been the first guy to get a fully guaranteed contract. To me, that’s something that is groundbreaking, and it’ll make negotiations harder with others. But it doesn’t necessarily mean that we have to play that game, you know? We shall see.”

As all of this plays out, Watson is rightfully looking to endear himself to the Browns fan base. For many, leading the team to Super Bowl contention will cure all ills. For others, Watson’s name will always be linked to these allegations. Fair or not, that’s human nature.