Fortunately for the Cleveland Browns and their fans, the Deshaun Watson appeal hearing reportedly won’t be overseen by NFL Commissioner Roger Goodell.

The top headline in NFL circles on Wednesday was the revelation that the NFL planned to appeal the ruling of Judge Sue L. Robinson of a six-game suspension for Browns QB Deshaun Watson. Despite the league requesting a season-long ban, Robinson ruled that the precedent set by previous judgments on players involved in domestic violence or sexual misconduct did not allow for Watson to receive more than six games.

However, the league was not satisfied with that decision and officially informed the NFLPA yesterday that they will appeal the ruling, with reports suggesting they will once again pursue a season-long suspension.

Based on NFL guidelines, it would be within Goodell’s power to handle the appeal hearing himself and make a new and permanent ruling. But that would obviously not be a good look for the league and on Thursday, Pro Football Talk reported that the NFL commissioner will not take the bold step of overseeing the hearing.

Who could oversee Deshaun Watson appeal for NFL?

In the same report, PFTs Mike Florio made an interesting suggestion about who could take on the role of an objective arbitrator for the appeal. Since it will be the NFL that designates a person for this job.

Florio suggested that former US attorney and former chair of the Securities and Exchange Commission Mary Jo White could land that gig. White recently led the investigation into allegations of tanking and tampering by the Miami Dolphins. That examination resulted in Dolphins owner Stephen Ross being suspended until October and the organization losing two future draft picks, including their first-round selection in 2023. 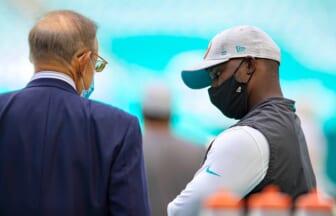 The NFL insider claims White has done “a very good job of giving her client that which it wants” and that with the NFL being adamant about using Watson’s suspension to send a major message across the league, White would once again deliver on what the league is looking for.