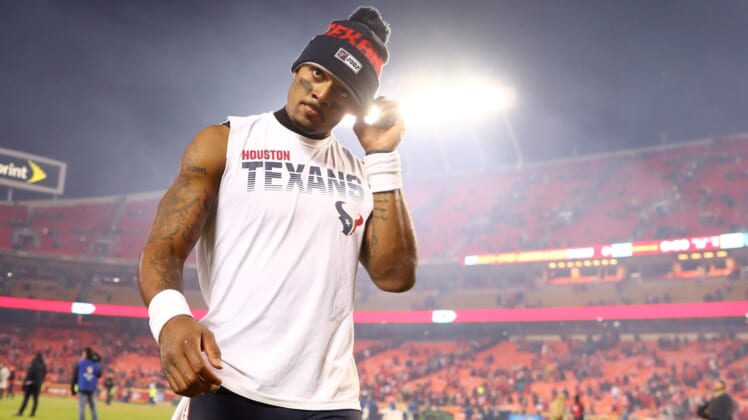 Deshaun Watson has seen the amount of civil assault lawsuits filed against him continue to rise, as 12 women have now come forward accusing the Houston Texans quarterback of sexual assault or similar misconduct.

All these suits are coming from clients of Texas lawyer Tony Buzbee, who held a press conference Friday to provide further information on the escalating situation.

Robert Littal of BlackSportsOnline posted a thread on Twitter that outlined what took place at Buzbee’s presser:

“This case isn’t about money. It’s certainly not about seeking publicity or fame. I personally don’t need it,” said Buzbee, per the Houston Chronicle‘s Aaron Wilson. “These women don’t want it. This case is about female empowerment, taking the power back.”

Buzbee also said, per NFL Network’s Tom Pelissero, that he’s going to cooperate with the NFL as the league investigates Watson under the personal conduct policy, and that a packet regarding the allegations has been assembled for the Houston Police Department to look at.

Alleged authentic text messages leaked earlier on Friday that appeared to show Watson apologizing to one of the women involved in these civil lawsuits.

Watson’s agent, David Mulugheta, issued a firm denial that his client did anything wrong, and that he would ultimately be exonerated:

Watson also tweeted that he looks forward to clearing his name.

It may be a considerable wait before enough details emerge from all sides to determine what really happened.

The issue with stories like this leaking online is the widespread tendency to jump to conclusions.

Those who support Watson in the extreme will likely dismiss the victims’ claims outright, and argue that the timing is suspicious because of his demand to be traded away from Houston. Those who are convinced Watson is in the wrong due to the sheer quantity of lawsuits will contend that he requested the trade in the first place to flee the Texans before these allegations surfaced.

Neither one of those viewpoints is fair. The only real takeaway that can be had from this harrowing situation at this moment is that Watson’s future in the NFL is at stake, and his ability to play in Houston or elsewhere will come down to the veracity of these allegations.

Teams that are in the market to trade for Watson will need to let the legal situation play out before deciding what to do. The Texans are in a tough place as they try to rebuild their roster, but until Watson’s future is determined, they’re going to have to scramble for contingency plans at the quarterback position.

However this turns out, it’s going to be a tough story to continue processing for everyone involved.