DeSean Jackson won’t solve every issue, but the Raiders offense needs him 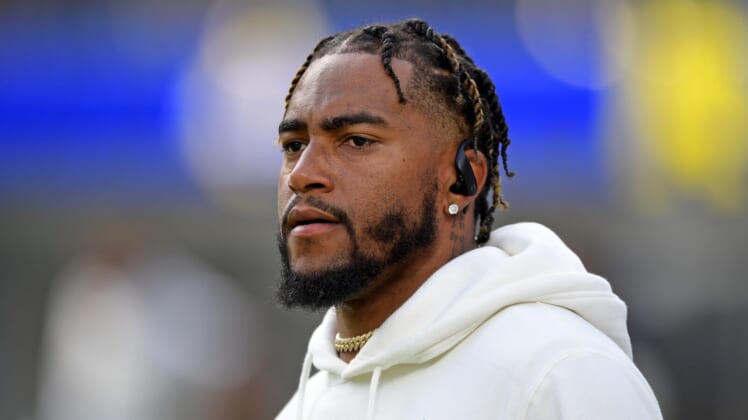 After a difficult week filled with emotions attached to Henry Ruggs III’s tragic car crash for which he is facing DUI resulting in death, DUI resulting in substantial bodily harm and two reckless driving charges, the Las Vegas Raiders took the field for a matchup against the New York Giants Sunday. Though they didn’t look completely flat, several issues cost them the game.

The Raiders made six trips into the Giants red zone and scored 15 points. The offense scored one touchdown, settled for three field goals, missed a field goal and lost a fumble on those drives. Ultimately, the Raiders final turnover sealed their fate in a 23-16 loss.

Quarterback Derek Carr had his worst game of the season, throwing two interceptions, both to safety Xavier McKinney, who returned one for a touchdown.

As the case for most of the first seven games, the defense generated pocket pressure, but the unit continues to struggle to plug holes against the run. Former Raiders running back Devontae Booker ran for 99 yards on 21 carries. As a team, New York rushed for 149 yards, averaging 4.8 yards per rush attempt.

To package it all together, red-zone inefficiency, turnovers and poor run defense cost the Raiders Sunday’s game. Sure, the players may have dealt with some emotional distress, but the team didn’t seem disinterested or distracted. The Raiders outgained the Giants 403-245 and failed to finish enough drives with touchdowns as opposed to field goals.

After the loss, CBS Sports’ Josina Anderson received a text from free-agent wideout DeSean Jackson that confirmed his intention to sign with the Raiders. The 14th-year veteran confirmed the news when he posted a jersey swap on social media:

Even at 34 years old, Jackson’s skill set matches Ruggs’ capabilities. While on the field for just 23 percent of the offensive snaps through seven contests with the Los Angeles Rams, he hauled in eight passes for 221 yards and a touchdown. He’s a big-play specialist who will create room for the intermediate passing game, which means Waller, Drake and Renfrow should have more room to operate in the middle of the field.

As we saw with Ruggs, the Raiders don’t need a dominant No. 1 wide receiver for the offense to operate at a high level. He averaged 3.4 receptions per game this season. DeSean Jackson can provide three-to-four big plays in a game and keep safeties out of the box and on high alert 20 yards downfield.

Some critics may question if DeSean Jackson has lost a step at his age. Well, according to Next Gen Stats (h/t Jake Ellenbogen), he clocked one of the fastest times on a touchdown reception in Week 3 against the Tampa Bay Buccaneers.

Though DeSean Jackson has battled soft-tissue injuries throughout his career, the Raiders only need him for half a season and perhaps beyond if they make the playoffs. While he can take on a prominent role among a group of young wideouts, he’s not going to handle a heavy workload with double-digit targets, which lessens the wear and tear on his body.

Staying aggressive and opening up the field

DeSean Jackson isn’t going to patch up the Raiders run defense, but just as Ruggs did, he’s going to bring an explosive element to the offense, which could’ve helped a passing attack that looked out of sorts in stretches Sunday.

Just think about what a 30-yard touchdown grab might’ve done for a sluggish second-half offense plagued with drops and missed opportunities. Of course, Carr has to throw with better accuracy, he put the blame on himself at the podium during the postgame press conference:

Assuming Carr reverts to the quarterback who completed 67.7 percent of his passes and frequently pushed the ball downfield, averaging nine intended air yards per attempt, he’ll have some highlight throws to Jackson that will spark the offense. As a result, you’ll see Waller in one-on-one situations or the running backs racking up yards after the catch without a safety in sight.

For a team with all of its issues, Vegas just needed one final drive to tie the game or take the lead Sunday. With one chunk play, they could’ve pulled out a sloppy victory. Now, with DeSean Jackson, the Raiders have someone capable of changing the complexion of games with a few big catches.