Days after being released by the Los Angeles Rams, free-agent wide receiver DeSean Jackson is generating a ton of interest on the open market and is weighing all his options to find the right landing spot.

Jackson and the Rams agreed to part ways this past week, originally seeking a trade. But when Los Angeles couldn’t find another club willing to give something up, they placed the 34-year-old receiver on waivers. After no team claimed him, Jackson became a free agent.

According to NFL Network’s Mike Garafolo, seven teams have shown interest in Jackson and have either reached out to him to his agent. The veteran receiver is looking for the right opportunity, wanting to play for a contender who offers him a bigger role than he played for the Rams. 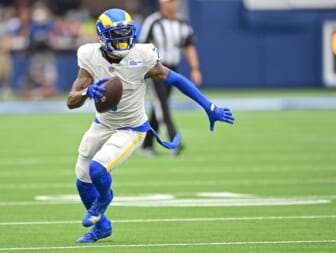 Jackson signed with Los Angeles this offseason, hoping a return home would allow him to compete for a Super Bowl and to play a prominent role in the Rams’ vertical passing attack. But outside of one big game against the Tampa Bay Buccaneers, he has hardly seen the field.

A three-time Pro Bowl selection, Jackson hit the open market as the top free-agent wide receiver available. But with the Cleveland Browns parting ways with Odell Beckham Jr., the situation has changed.

The Browns and Beckham Jr. agreed to terms on a release, which will put the Pro Bowl wide receiver on waivers Monday. With claims processed at 4 p.m. EST, many of the teams interested in Jackson will likely want to wait to see if they can land the better option.

There’s also an incentive for Jackson to let things play out. Only one team will land OBJ, meaning those who miss out on him will be even more inclined to sign the best remaining option. For the 5-foot-10 vertical threat, that could mean a better offer financially or promises to play a bigger role on his next team.

Jackson will spend the next few days evaluating his options before making a final decision. While he might not have an OBJ-like impact for the offense he joins, the speedster should still play a more significant role than what he had in Los Angeles.