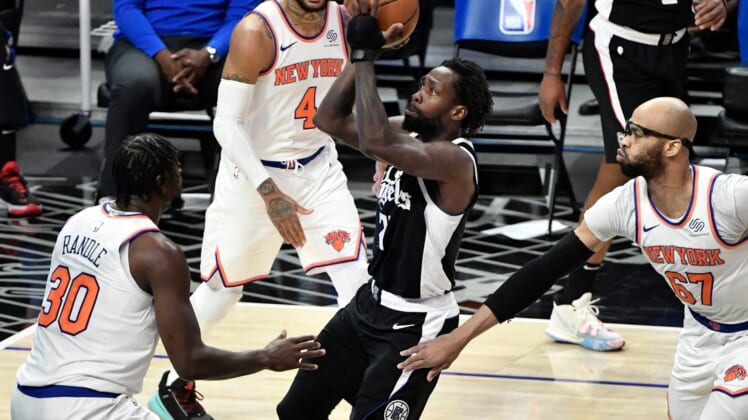 Buoyed by the 3-point shooting of Reggie Bullock and playmaking ability of Derrick Rose, the New York Knicks ran past the Los Angeles Clippers 106-100 Sunday afternoon at Staples Center.

Rose led the Knicks with 25 points and eight assists off the bench. Bullock finished with 24 points on 5-for-12 shooting from behind the arc. RJ Barrett added 18 points and seven rebounds and Julius Randle chipped in 14 points and 14 rebounds.

The Knicks finished a perfect 9-for-9 from the free-throw line. New York played solid perimeter defense, holding the NBA’s top 3-point shooting team to just 12-for-35 (34 percent) from beyond the arc.

With the win, New York (38-30) remained the No. 4 seed in the Eastern Conference, pushing their record to 3-2 on a six-game road trip that finishes with a contest against the Los Angeles Lakers on Tuesday.

The Clippers ended a four-game homestand at 2-2 and now finish the regular season with four games on the road.

Los Angeles led by as many as 10 points in the opening quarter and led 29-26 at the end of the first. However, the Knicks outscored L.A. 30-25 in the second quarter to take a 56-54 lead into halftime.

The Knicks extended that lead to five points by the end of the third quarter. The Clippers managed to cut New York’s edge to three points in the fourth quarter but could get no closer the rest of the way.