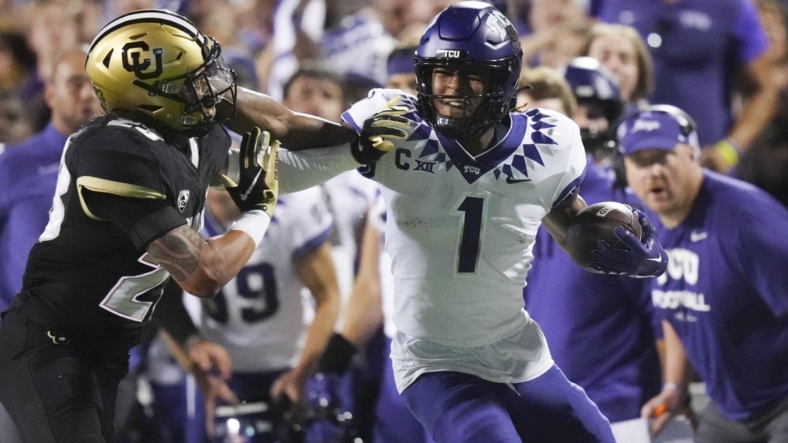 Derius Davis returned a punt 60 yards for a touchdown and ran for a 27-yard score as TCU crushed Colorado 38-13 on Friday in Boulder, Colo., in the season opener for both teams.

TCU’s Chandler Morris completed 13 of 20 passes for 111 yards before leaving with a knee injury late in the third quarter. Max Duggan was 2-for-3 for 27 yards in relief.

J.T. Shrout produced 157 yards and a score on 13-of-23 passing, Brendon Lewis was 13-for-18 passing for 78 yards and Jordyn Tyson caught a TD pass for the Buffaloes.

Colorado capped a drive late in the first quarter with a 37-yard field goal by Cole Becker for a 3-0 lead.

TCU picked up its initial first down on the next drive, but was forced to punt, then held Colorado to one first down on the ensuing drive. The Buffaloes punted to the Horned Frogs’ 40 where Davis caught it and ran down the left sideline for a touchdown and a 7-3 lead with 14:36 left in the half.

Colorado responded with a 12-play, 50-yard drive that went to the TCU 20. The Buffaloes settled for another Becker field goal, this one from 43 yards out, and TCU subsequently went into halftime up 7-6.

The Horned Frogs took control in the second half. They took the opening kickoff and went 75 yards on five plays, capped by Demercado’s 43-yard TD run to make it 14-6.

Griffin Kell’s 33-yard field goal late in the third made it 17-6, and TCU put it away early in the fourth.

A Colorado punt pinned TCU at its own 20, and after a run for a loss, Duggan ran for 33 yards to get near midfield. Eight plays later, Miller scored on a 3-yard run with 10:55 left.

Shrout connected with Tyson on a 23-yard TD pass with 1:13 remaining.