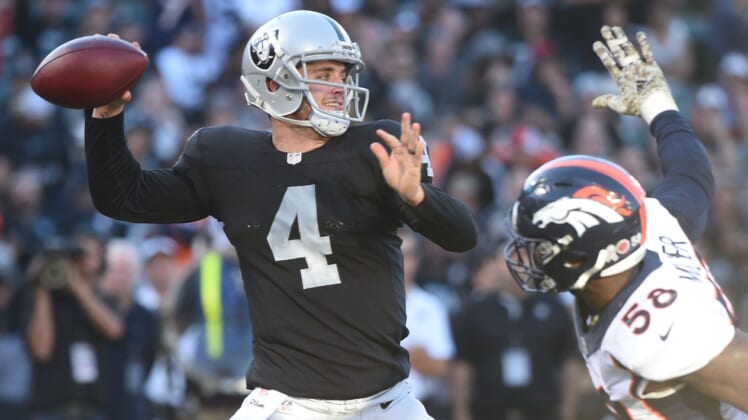 Derek Carr and the Oakland Raiders are working on a contract extension. But if no deal is struck when training camp begins, the quarterback says he’ll simply play out his rookie deal.

The reason being, he doesn’t want anything distracting him at that point in the proceedings, as he told Michael Gehlken of the Las Vegas Review-Journal.

Derek Carr says he will play out deal if not extended before start of training camp. "I wouldn't answer my phone." Doesn't want distraction.

Oakland general manager Reggie McKenzie has made it clear he wants to ink Carr to an extension, and if he’s smart it’ll happen before training camp. Already one of the hottest young passers in the league, Carr’s value will only increase the further down the road this can is kicked. The big reason being that, with the rising salary cap, any franchise quarterback will stand to earn more money with each passing season.

At one point it was reported that Carr is frustrated with the pace of negotiations, but that’s something that was quickly tamped down by both him and the organization.

If no deal is struck before Carr’s mandated deadline, then the quarterback will earn just under $1 million in base salary for the 2017 season. Because he was a second-round pick in 2014 out of Fresno State, the Raiders had no ability to give him a fifth-year option.