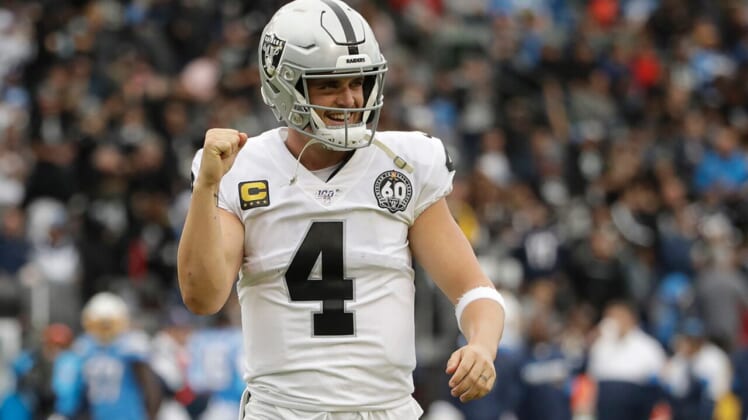 As part of a Zoom call with donors to the DC4 Kids Touchdown Challenge program benefiting Valley Children’s Hospital Fresno, Carr talked football and adjusting to life in Las Vegas.

When it comes to giving back to the community, there’s no questioning Derek Carr’s commitment to helping others – especially kids.

As part of a Zoom call with donors to his DC4 Kids Touchdown Challenge program benefiting Valley Children’s Hospital Fresno in his hometown, Carr answered questions on everything from football to what it’s like now living in Las Vegas with his growing family.

“Moving out here right after the season was over has been a blessing,” Derek Carr said answering a media question on the call. “During all this time with COVID, all the things we needed to get done – oh, you need the electrician or another person, were all delayed. So, we just finished everything and got settled. I can’t imagine moving out here this week! It’s a blessing that we have been out here for so long and got all that out of the way.”

And while fans sometimes forget players have families and a relocation can be tough work as they head into the season, Derek Carr’s mind is squarely on football and the coming season.

“It’s my third year in the system, and every year I’ve played in this system the numbers have gone up, the production, the efficiency have gone up, all that,” Carr said. “And as we add the new guys, what people can start seeing, Raider fans, is that our team is getting better. We were a top 10 offense last year. People don’t want to talk about that, they talk about other stuff. We were a Top 10 offense, and we’re healthier, and we’ve added more talent.”

Carr has been working hard and he and his teammates have been practicing at a local park the past few months trying to stay in shape and find a rhythm amid the lack of offseason workouts. The unofficial workouts have included rookies and veterans alike all trying to acclimate to their new city but also keep their football minds sharp.

Derek Carr also talked about first-round draft pick Henry Ruggs III who he has also had the chance to work with this strange offseason. That’s especially important for a quarterback and young receiver who need to develop a relationship before stepping on the field. A good example of that is the close relationship Carr has forged with second-year wideout Hunter Renfrow. So what did Carr think of Ruggs after working out with him in Las Vegas?

“Obviously, he is a rookie and there’s a lot to learn, but it is a lot of fun,” Carr said. “Literally, 5 minutes before this zoom call, he was in my living room. We were having a walkthrough…he wanted to come over. He and our running back Lynn Bowden, they came over to my house and I’m teaching them the playbook. Going through it and giving them details. So, those are the little things I’m talking about. They’re reaching out to me, and saying: ‘Dude, can we come over?’, and I say I got something at 11am and they say, no we’ll leave before then.”

Carr also talked about how much he appreciates the contininutiy the second Gruden era has brought to the Raiders organization. Between owner Mark Davis’ commitment to the coach, and the addition of general manager Mike Mayock, the quarterback says he feels everything is set up for he and his team to succeed.

This is the first time in my career where I’ll have a coach for the third year in a row,” Carr said. “This is the first time where it’s the same system so this time is legit. I’m doing it again for the third  time and we’re adding some stuff. We’re at a Graduate level course that not a lot of other people are at, as a play caller and quarterback. What we’re going to be able to do together, and what we can do today, without even going through training camp is a lot farther along than other teams and with this quarantine I think we have a real advantage.”

As the NFL and the NFL Players Association continue to finalize a deal before next week’s start to training camp, Carr said he wants fans and players to be safe under current conditions. Carr said although opening the season at home in the new Allegiant Stadium against certain Hall of Fame Drew Brees is exciting (with or without fans), he wishes that first game was a different opponent.

When a teenage fan of Carr’s asked about his role models, he was quick to talk first of his father and brothers as the central examples in his life but then mentioned one of his sports heroes: Kobe Bryant.

Bryant, who died earlier this year in a helicopter crash, has always been a Carr favorite and the quarterback talked about what he learned from watching and talking to the Lakers great.

“My number one role model outside of my family would be Kobe Bryant,” Carr said. “I wanted to pick somebody who worked harder than anybody else. I wanted to pick someone with the determination, the grit. Kobe Bryant is the reason that I played when I broke the three bones in my back, he’s is the reason I played with a broken finger. Because I learned from him that determination to not let your teammates down. And that failure is not an option. If I fail at something it doesn’t sit right with me. Now, do I screw up?  Yeah, I screw up, and all my screw-ups are on live tv so you get to watch them all.

“I would encourage you Nick, whatever you want to do, and wherever your heart is going, pick someone you think is the very best. Whoever makes you want to run out on that field, or be in that profession; whoever works the hardest and is the most determined, pick them. Because it helped me get through a lot of things. A lot of people when I was young or in high school told me you’re never going to do this or that. And here I am years later, still doing it. And still going strong. A lot of that has to do with my family, but a lot of that has to do with Kobe Bryant.”

Coming back to the Raiders in their first season in Las Vegas, and the differences in the franchise now vs. earlier in his career, Carr said the organization as a whole is on solid footing and on a trajectory not seen during his tenure in the silver and black.

…honestly, we should have won 10, or should have won nine, if it wasn’t for me sliding in bounds and them calling it out, and a two-point conversion at the end of the game, a lazy D-lineman put his hand up. Right? – Derek Carr on 2019 season

“But I will say that what Coach Gruden is doing, what Mr Mayock is doing, is the best thing that’s ever happened for the Raiders,” Carr said. “It’s been really impressive to watch those two work together and work their tail off. I’ve been around great coaches. I’ve been around a great GM. I’ve been around all those things. But when everything from the top down is working in one heartbeat and going in the same direction – you saw it the first year. We blew the whole team up and it was a tough year. And then the next year we come out and everyone picked us to win 5 games again. Well, guess what! We came out and …honestly, we should have won 10, should have won 9, if it wasn’t for me sliding in bounds and them calling it out, and a two-point conversion at the end of the game, a lazy D lineman put his hand up. Right?

“So, I would say my excitement level is because of their commitment and consistency. Everyone can be great once a day. Everyone can be great every now and then. But to be great and give great effort on a consistent basis, every day, every single day of the week, every year, year in and year out, not a lot of people can do that. And we have a group, a team, of a lot of guys that do that every day. So I think that that’s where my excitement comes from.”

Make sure to check out the DC4 Kids Touchdown Challenge program benefiting Valley Children’s Hospital Fresno and give what you can.

Editorial Note: Longtime listener and reader Wendy Pierre in Santa Rosa shared the transcript of this call with Silver and Black Today from this Charity Q&A for donors. Wendy has been a donor since Derek Carr set up the Foundation.