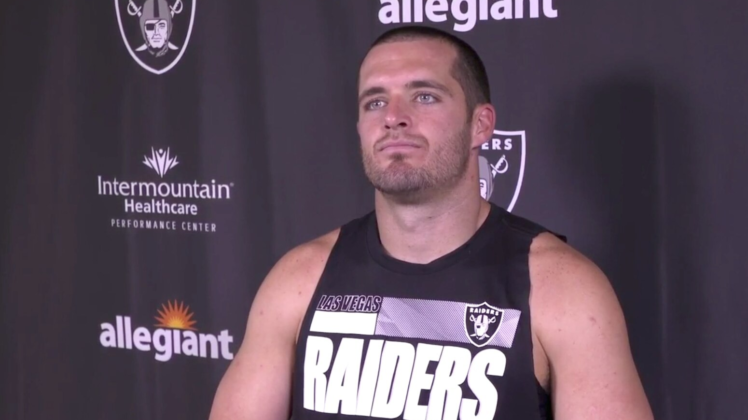 After the second day of full-contact practice, Derek Carr Raiders quarterback says he and the Las Vegas Raiders leadership are in lock-step and it makes a difference

For Derek Carr Raiders quarterback, practice early on in training camp feels much different than any time before in his seven-year career. Besides having to deal with a pandemic that disrupted the offseason, Carr, speaking to the media on Tuesday, said the continuity that comes with the third year of the same coach, same playbook, same general manager and an engaged owner has helped him tremendously

“Aw man, It’s been great,” Derek Carr said. “I’ll say this: my relationship with Mr. Davis, Mr. Mayock and Coach Gruden has shown me how a professional organization should be run. All of us are on the same page all the time.”

The Derek Carr News Was Wrong

Of course, that goes contrary to what we’ve heard over the past few years from supposed insiders who claimed Carr wasn’t Gruden’s “guy” and that the seventh-year pro was on his way out. All the Derek Carr news focused on his status as being unknown vs. what the truth really was. Instead, Gruden and general manager Mike Mayock has stayed the course with their starter and built a better offense around him including nabbing Henry Ruggs III in the first round and Bryan Edwards in the third of the 2020 NFL Draft to give the quarterback a deeper and more talented wide receiver corps than he’s ever had.

With observers saying Carr looks crisp, in command, and showing a bit of a chip on his shoulder this Raiders training camp, that continuity throughout the organization clearly has Carr at ease. The Derek Carr news this training camp is much different.

“We’re sitting there talking about stuff, figuring stuff out for the team,” Carr said. “And we’re all the same page, we all talk on the same level. Whenever that’s the case, there’s no ‘he thinks this, we’re going to go this way’ we’re all pushing in the same direction, and that’s your best chance to win.”

For Carr, Trust Has Been Everything

That level of trust, connectivity, and mutual respect is something Carr says not all NFL signal-callers know first-hand.

“Everything Mr. Davis, Mr. Mayock and Coach Gruden have told me – every single word – has come true to a T,” Carr said. “Other quaterbacks I talk to, around the league, they don’t even know what’s going on (with their own team) and it shows.”

After all the drama and turmoil outside the building and the Derek Carr news being focused on the negative, as it turns out the support from his owner, GM, and coach are helping him focus more on football. The lightness about him when he speaks of it is evident.

“One thing I’m thankful for as a quarterback and as a player is you’re always told the truth,” Carr said. “You always know where you stand.”

It all make sense. When the world and media was swirling with rumors about Carr’s time with the Raiders being in jeopardy, Carr didn’t at all appear worried. And while some grumbled the team wasn’t giving him the vote of confidence he deserved, both sides clearly knew exactly what the plan was.

“One thing about them that I think – the main thing, is everything they say comes true,” Carr said in closing. “They are exactly who they say they are.”

The new lightness and confidence displayed by Carr has also been noticed by his coach.