Derek Carr on Raiders fans booing him: ‘It’s happened before’ 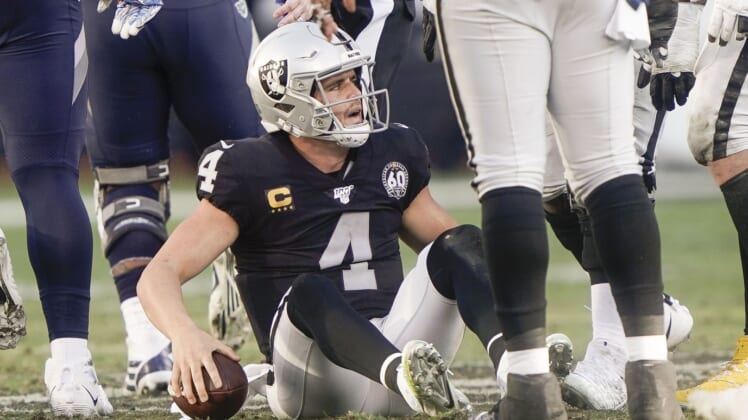 Derek Carr and the Oakland Raiders were blown out for a third consecutive game on Sunday, losing a home contest to the Tennessee Titans by the score of 42-21.

Said loss pretty much ends any playoff aspirations for a Raiders team that has one more home game in Northern California next week before relocating to Las Vegas.

Carr himself was the victim of boo birds at the Oakland Coliseum following yet another questionable performance from the much-maligned quarterback.

In talking about getting booed, Carr had a rather interesting take.

It’s happened before. You play here long enough and that will occur,” Carr said, via Scott Bair of NBC Sports Bay Area. “We have a rowdy group and that’s why we love them. They’re passionate, and they just want to win. It’s just like family. Even when they’re mad at you, they still want to hug you. They still want you to do well. I understand that frustration. I think I showed some emotion, too. I don’t think anything of it. It has happened for six years.”

Raiders fans were right to boo. It might not have been all on Carr, but he didn’t help matters with at least one questionable decision.

Meanwhile, Oakland’s defense was ripped to shreds by Ryan Tannehill and the Titans’ offense.

Now at 6-7 on the season, Oakland finds itself two games out of the final wildcard spot in the AFC. The team will need to win out and get some help to make a surprise postseason appearance. Unfortunately, the Raiders have now been outscored 116-33 over the past three games. Ouch!