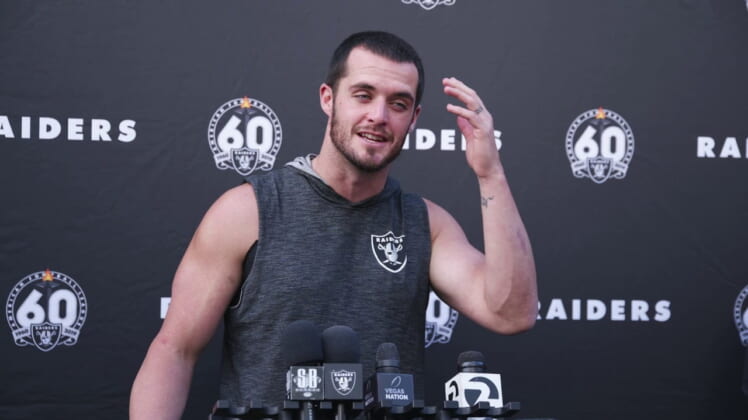 Talk of poor play and a bad record in cold weather bubbled up as the main storyline for the quarterback this week but is it really a concern?

To young children, telling them the Boogeyman would grab them from under the bed sounds terrifying. As adults, we sometimes create our own personal Boogeyman. Oakland Raiders quarterback Derek Carr faces a more realistic foe at Arrowhead Stadium where he’s yet to win a game in his six-year career.

Depending on who you ask, Carr’s poor record in cold weather is a major hurdle in his ability to win games late in the season, especially division showdowns with the Kansas City Chiefs.

This week, it seems as though the media outlets and personalities have focused on the weather forecast more than the Raiders’ actual opponent on the field. We’re not talking about Patrick Mahomes’ improvisation in and out of the pocket, Tyreek Hill’s blazing speed or Frank Clark and Chris Jones in the pass rush.

Instead, Carr has been peppered with questions about inclement weather and sub-50 degree temperatures. In comparison to NFL analysts, weather forecasters have just as much pertinent information about a crucial football matchup.

“Jack was with there with me a couple of those times,” Carr said. “I used to think this was a team game. Yes. It’s all my fault and I take full responsibility.”

Carr spoke with a smile on his face and seemed to take his former head coach’s criticism in stride, but all the talk about the weather may creep further into his psyche if he didn’t think about it already.

In order to take command of the AFC West, Carr must find a way to win on the rival’s turf, whether the Chiefs have a better team or not, he cannot allow Arrowhead Stadium to become his House of Horrors and allow doubt take over his mind when he steps on the field in Kansas City.

Carr has attempted to downplay the effect of weather on his performances, speaking about his time at Fresno State on the collegiate level, per The Athletic‘s Vic Tafur.

“I’ve never really minded the cold or anything like that,” Carr said. “Playing in the Mountain West, you play a lot of cold games, especially at night. Reno, Laramie, Wyoming, some of the desolate places. And so you kind of get used to it, but I’ve never really had a problem with it. Coming from Fresno, you kind of get shocked by it, but you get used to it real quick.”

Critics have used the Raiders’ embarrassing 34-3 loss to the Jets as another index on Carr’s subpar performances in cold temperatures, but there’s one major issue with using that particular game.

Carr’s pass-catchers had some head-scratching drops, and the team as a whole struggled at MetLife Stadium. Head coach Jon Gruden talked about the miscues at the postgame presser.

“We dropped passes,” Gruden said. “Hell, we dropped four center-quarterback exchanges in the second half. We missed tackles. We missed field goals. We missed an opportunity to show our fans that came out today what kind of football team we are.”

We can’t pin all of that on Carr.

On the other hand, we must acknowledge that Carr has to leap over the Arrowhead Stadium hurdle, preferably with two hands on the football. ESPN’s Trey Wingo tweeted a more meaningful statistic with some context that bears consideration:

In order to take command of the AFC West, Carr must find a way to win on the rival’s turf, whether the Chiefs have a better team or not, he cannot allow Arrowhead Stadium to become his House of Horrors and allow doubt take over his mind when he steps on the field in Kansas City.

Leading up to Sunday’s contest, Carr must clear the cache in his mind like an internet web browser, throw away the circumstantial records and focus on the opponent. He must limit his thinking to, “how do I beat the Chiefs?” instead of “how can I overcome the cold weather, the unfriendly confines of the venue and the Chiefs?”

Carr has to simplify his thought process or risk fighting too many psychological demons at once.

Secondly, both Carr and Del Rio made valid points in their indirect exchange. The Raiders signal-caller playfully took all the blame for the team’s losses in less than ideal conditions, but he also mentioned it’s a team game. The former head coach seems to agree with that portion of the quarterback’s statement.

In Del Rio’s tweet, he suggested “the need to pound the rock” and limit Mahomes’ deep ball, which is exactly the winning game plan.

Carr doesn’t have to flex his muscles, play sleeveless or take snaps without a glove to prove a point to naysayers. He just needs to do enough to win the game. Whether he throws for 300 yards or 100 isn’t directly indicative of a victory or defeat if running back Josh Jacobs is the focal point on offense.

Let’s start with a hard-hitting statistic. The last four teams to rush for more than 100 yards against the Chiefs have won the game. The Tennessee Titans, Green Bay Packers, Houston Texans and Indianapolis Colts all put together a similar offensive blueprint.

The Raiders are 3-1 when Jacobs eclipses 100 rushing yards. The rookie running back has scored in four games and Oakland won each of those contests. The latter statistic is a bit fluky, but the winning formula involves a strong commitment to the ground attack, which keeps Mahomes on the sideline and the offense moving downfield.

Oftentimes, our biggest life obstacles and critics shrink when we don’t provide excessive credibility to the source of doubt. Carr’s chief concern is Kansas City’s defense—not the reading on a thermometer at kickoff.

The Raiders’ game plan versus the Chiefs isn’t rocket science or physics. They have to feed Jacobs, who’s averaging 4.8 yards per carry and lists sixth leaguewide in rushing yards (957), don’t turn the ball over and keep the action in front of the defense—no chunk plays deep downfield.

Easier said than done, but Carr can help pace the offense with presnap adjustments to counter the defense and shrewd decisions in the pocket. This is chess, not checkers.

More importantly, he must play within himself. If that means handing off 30 times for a win—so be it. If a victory calls for a few scrambles to move the chains—do so with ball security. Lastly, forget the Boogeyman—or weather forecast. Just line up and play the game.

Oftentimes, our biggest life obstacles and critics shrink when we don’t provide excessive credibility to the source of doubt. Carr’s chief concern is Kansas City’s defense—not the reading on a thermometer at kickoff.