Derek Carr Isn’t Going Anywhere So Give it a Rest 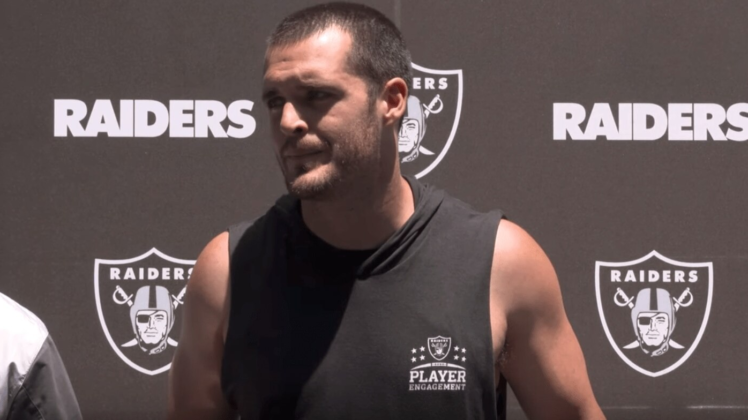 Both the Raiders franchise quarterback and head coach Jon Gruden seemed to signal a desire to move on from quarterback questions at Tuesday’s workouts — and fans and media should listen.

What is it with Raider Nation that it can seem to cure itself of DCDS?

What is DCDS you ask? Derek Carr Derangement Syndrome, of course.

At Tuesday’s media gaggle with both player and coach, an assertive and somewhat irritated (yes, even one of the nicest guys in the sport can lose his patience) Carr tried to put behind the ludicrous and unfounded chatter about his future with the Raiders once and for all. Since the end of last season, and heading into the NFL draft, Carr was constantly running on the rumor mill with “experts” claiming he’d be traded to move up in the first round so the Gruden could grab Kyler Murray or another quarterback somewhere in the draft.

He also had to endure a constant drumbeat of national media coverage alleging that both Gruden and general manager Mike Mayock weren’t sold on him or his future in the silver and black.

Then the draft came and went and the Raiders didn’t dump Carr or call a quarterback’s name in the draft. You’d think that would be enough but no. The question about his long-term future with the team was again raised Tuesday after the team’s offseason workouts in Alameda. This time, Carr shot back.

“Honestly, it got annoying after a while,” Carr said of the pre-draft speculation. “I didn’t help the situation trying to challenge people to fights.”

Of course, Carr was referring to his infamous Twitter feud with ESPN’s Max Kellerman who questioned his toughness and Gruden’s desire to keep him around.

“The owner, the GM, the coach, and the quarterback – I’ don’t know about other places – but we’re all on the same page here,” Carr said. “I’m honestly going to be here a long time. I’m not going anywhere and this is my team and it will be for the next, however long I want to play.”

Why isn’t this declaration and the organizations action proof enough for some? Who knows but anymore speculation or repeating of the narrative is just plain ignorant.

It’s time to let Carr do his job. Just like any professional athlete, he’ll have to prove himself every single season. These men make ungodly amounts of money to play a game so the pressure never, ever subsides. Let’s allow Carr the time to play his game.

All this gnashing of teeth does no one good. The Raiders will be an improved squad in 2019 and the quarterback will be no different. His coach is committed and the organization has placed its bet on No. 4.

Give Carr the chance he deserves to achieve those goals. He’s earned it and his teammates, coaches and the Raiders organization believes he can deliver.