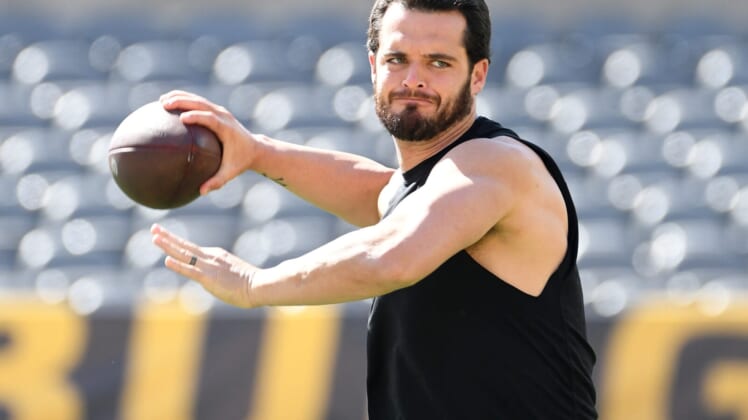 For years we’ve heard from Las Vegas Raiders fans and pundits what quarterback Derek Carr needed to be successful and lead the Silver and Black back to the playoff promised land. Everything from more “tools” on offense to help on defense have been the rallying cry for the Raiders faithful. And, of course, they were partially right.

Flash forward to 2021 and the Raiders are off to their best start since 2002 (the last time they played in a Super Bowl), they have all the tools they need on offense, and their defense resembles an actual competent and fine-tuned NFL defense.

Yet with all of these pieces falling into place for Jon Gruden’s Raiders, it’s the piece that’s always been there delivering the most impactful performance — Derek Carr. Carr is off to an early MVP-like season thanks to a better supporting cast but to classify that as the reason the team is winning under his leadership is selling him, and his progress in his eighth season, short.

As my Silver and Black Tonight and Silver and Black Today: Game Day co-host Moe Moton recently pointed out, Derek Carr is off to his hot start despite a rash of injuries, an all-new and incomplete offensive line, and he’s missing Josh Jacobs. While the performance of his stacked receiving corps — including all-world tight end Darren Waller and young wideouts Hunter Renfrow, Henry Ruggs III, and Bryan Edwards — has helped make up for a below-average running game in Jacobs’ absence, it’s still Carr who is making it happen on offense for the Raiders. His maturity in the Gruden offense and his year-over-year improvement in the pocket have been remarkable to start 2021.

The idea that Derek Carr was too dependent on the check down has always been a bit of hyperbole. Yes, there have been times when Carr may have resorted to the outlet pass instead of progressing with looks downfield. But, as he and Gruden have said numerous times, that is what his coach asked him to do.

In 2020, for example, Carr did rank third overall in checkdowns at 10.3 percent. But when asked about it and the criticism Derek Carr didn’t mince words.

“I also love when people say that we only throw checkdowns to Jalen Richard,” Carr told The Athletic’s Vic Tafur in 2020. “But those are called plays for Jalen Richard. You know?! These are plays where we are only running routes to get him the ball. Our yards per attempt and completion are super high and they are only going to get higher and grow higher as we’re adding speed and versatility on our offense. It’s only gonna get better.”

In 2021, Derek Carr is flinging the ball downfield with regularity. According to Pro Football Focus, Carr leads the NFL with a 96.2 passing grade when throwing 20-plus yards downfield.

Talking with the media last week prior to the Dolphins game, Carr talked about why he’s been able to push the ball downfield more in 2021 and how it all depends on the game and situation.

“Yeah, like always. I just try and execute it the best possible way I can, and the way Coach Gruden designs the
play. Where he wants the ball to go in certain looks and all those things,” Derek Carr said. “And especially in that first Ravens game because I was probably taking one too many shots instead of finding a completion early on. But it has a lot to do with what’s going on in front of you.

“It has a lot to do with what’s going on outside and what’s going on on the other side of the ball too. Sometimes you got to chew the clock up, you got to get completions and stay on the field and things like that. But we’ve been fortunate that our defense has been playing at such a high level. We’ve been able to take some shots, take some chances, and it’s been nice that some of those have worked out for us.”

Not only is Carr looking downfield more, but he’s also got receivers getting open and doing it consistently. Gruden talked about the progression of his receivers at 3-0.

“We had some balance yesterday (vs. Miami), which helped us win that game, but we have a lot of confidence in our receiving corps,” Gruden said Monday. “They may be young but they’re talented, they’re reliable, they’re tough and they’re versatile. And they are explosive, and if you center your attention on [Darren] Waller, I think these young guys are proving that they can do some damage as well. They got to continue to get better and better. They’re not perfect yet, none of us are, but we’re seeing a lot of progress.”

The inherent trust a quarterback must have in his receivers is vital to success on the field. Through offseason practices at local parks in Las Vegas, to the commitment of young players like Ruggs III to get in better shape and better at their position during the offseason, Carr has it now with this young group and it’s evident.

Derek Carr is not the “same quarterback” he’s always been

Both Moe and I have been fighting this narrative for weeks. Derek Carr isn’t the same quarterback he’s always been, and those asserting that clearly aren’t watching what he’s doing this season.

It started in 2020 as he settled into Gruden’s offense in his third year running it. It’s continued early this year with Carr showing a level of pocket presence better than any time in his career. He’s got more confidence and he’s making more plays happen by extending them — something Gruden said he had to do in order to get better three years ago.

Derek Carr’s ability to withstand pressure behind what has been a patchwork offensive line early this season shows this. It also makes what he’s done through Week 3 remarkable.

In an interview with Raiders.com during training camp, Carr talked about being “free” entering this season and it’s showing thus far. His calmness in the pocket and his ability to perform under pressure have been excellent. That confident leadership has built upon his already established trust with his teammates.

Putting it all together at the right time

There’s no question that everyone in the Raiders organization is feeling the pressure to win and be a playoff team for the first time in five seasons. Even GM Mike Mayock said so before the season began.

The time for Carr and the Raiders is now and to win in the NFL now, you have to have elite QB play and that’s what the team and Gruden are getting from the veteran signal-caller. While many of us always praised Carr for being a very good QB, his level of play thus far is elite and it’s the biggest reason why the Raiders are 3-0.

He’s not the same quarterback he’s always been — he’s better.