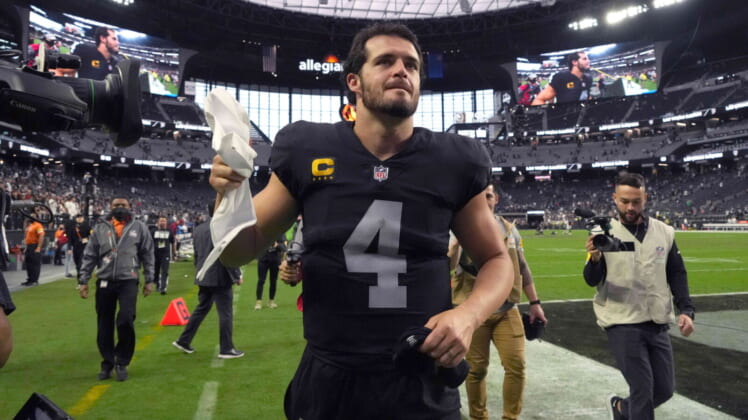 Las Vegas Raiders quarterback Derek Carr entered the 2021 season two years away from hitting free agency, in addition to his team having a bad finish to the COVID-19 pandemic-laden 2020 season.

However, in the final seven games to close out the season, the team only won twice and missed the playoffs for the fourth consecutive season.

Nine games into this season and after starting the year 3-0 for the first time since 2002, the Raiders have lost four of their last six games, but also lost their head coach and both of its 2020 first-round picks in that seven-week span.

Through 10 weeks of the 2021 NFL season, the Raiders are one of 12 teams in the AFC playoff picture with at least five wins and one of 11 with five or six wins.

Derek Carr must step up to preserve future in Vegas

Carr said former Raiders head coach Jack Del Rio told him the record illustrates what the team has done to that point in a season.

“As coach Del Rio used to say, ‘That’s what you’ve earned,’” Derek Carr told the media Wednesday afternoon. “You are what you’ve earned in this league and that what we’ve earned. But what we’ve earned is a really close race. There’s a lot of teams sitting there with a similar record. With a lot of those teams still on our schedule and some of those team we’ve beat, we know what out in front of us, but we know who’s in front of us this week.”

Over the last couple of weeks across the NFL, results have not gone as projected. For example, a 5-2 Buffalo team faced a 1-6 Jacksonville team in Florida two weeks ago. The Bills entered the game as 15.5-point favorites and lost 9-6 in a game the featured no touchdowns and five field goals.

It was the same week Las Vegas lost to the New York Giants on the road in two of many games that have not gone the favorites’ way over the last 14 days.

“You see it all throughout the league, especially the last two weeks,” Carr said. “Teams not having weeks they’re used to having or teams beating teams that usually wouldn’t beat them. We saw it all the last two weeks. It’s been really weird, actually. But what it’s done, is that it’s kept everything close, and we’ll see what happens.”

Over the last few seasons and in years past, teams that have started on a high note but finished flat, happen to a lot of teams, not just to the Raiders.

The 6-foot-3 play caller said that is due to the logistics of trying to build a successful roster.

“The NFL is designed for everyone to go 8-8 with the salary cap and the way everything is set up, the rules on waiver wire and things like that,” Carr said. “They want everyone to be as equal as possible. And then who wants to spend the money to do other stuff and trade draft picks away? You see teams trying to separate themselves and you see other teams go the other way.”

Although a team cannot go an even 8-8 with the addition of an extra game to the 2021 slate, there is an addition of one more playoff team, compared to in years past.

Thus far, Derek Carr and the Raiders have faced four teams in the AFC that would be playoff projected squads if the season ended today. Las Vegas is 2-2 with victories against Baltimore (6-3) and on the road at Pittsburgh (5-3-1) in the season’s first two weeks.

In all five wins this year, Carr has thrown for more than 300 yards, highlighted by 435 passing yards in an overtime victory against the Ravens that ended on a walk-off touchdown pass to wide receiver Zay Jones on an all-out blitz from the Baltimore defense. 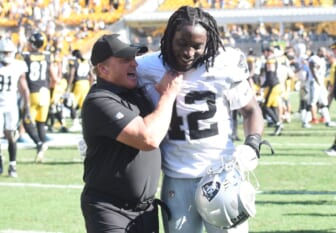 A strong end to the season will be key for the Raiders and not to match the finishes it has had over the last few years.

However, if the Raiders cannot turn things around and put together positive momentum toward a playoff appearance, the 2022 season could look a lot different with new faces in high-leverage roles as younger players continue to develop in the Silver and Black.