Derek Carr back in early MVP discussion with a legitimate defense 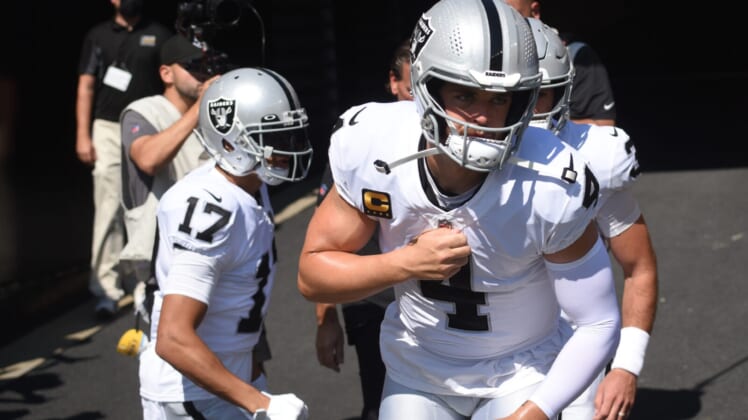 Two weeks into the 2021 NFL season, media outlets have touted Derek Carr as an early MVP candidate. Beyond his passing numbers (817 yards, four touchdowns and an interception), he made a huge imprint on the 2-0 start of the Las Vegas Raiders.

Sure, the Raiders poor defense and mediocre win-loss records overshadowed some of Derek Carr’s recent standout performances, but he’s doing more with a little less in terms of his supporting cast on offense.

Carr has an assortment of offensive weapons in Darren Waller, Henry Ruggs III, Bryan Edwards, Hunter Renfrow and Kenyan Drake, but he’s behind a five-man unit with four new starters compared to the previous season.

Two and half weeks ago, the Raiders signed guard Jermaine Eluemunor, and he’s replaced Denzelle Good, who’s on injured reserve with a torn ACL. Andre James, a first-time full-time starter, mans the pivot. At left guard, second-year pro John Simpson has started in place of Richie Incognito (calf strain). Rookie right tackle Alex Leatherwood missed the second half of Sunday’s game with an oblique injury, which elevated Brandon Parker into the first unit.

For context, Simpson and Leatherwood have allowed seven quarterback pressures apiece, per Pro Football Focus (subscription required), Derek Carr and James have had some issues with their exchange under center. Yet the Raiders field the league’s No. 1 passing attack.

Derek Carr has been a bonafide MVP candidate before

The last time Derek Carr’s name came up in MVP buzz (2016), the Raiders fielded the sixth-ranked rushing offense. Thus far, Vegas has accumulated the fourth-fewest yards on the ground, and running back Josh Jacobs missed the previous outing with toe and ankle injuries. As a team, the Silver and Black averages just 2.9 yards per carry, which ranks 31st leaguewide.

So yes, we’ve seen great performances from Carr before—think back to matchups with the New Orleans Saints (Week 2) and Kansas City Chiefs (Weeks 5 and 11) last year. But now, he’s expected to lead this team to victories with an offensive line that’s in the early stages of a jelling process and a nonexistent run game. That’s the difference between the weight on Carr’s shoulders back then and now.

Derek Carr deserves all the praises thrown his way at this point. In Week 1, he had to shake off preseason rust, but the Raiders kept the scores close enough for him to strike late with a fourth-quarter comeback and a game-winning drive. On a short week, he went to Heinz Field and carved up the Pittsburgh Steelers for 382 yards and two touchdowns. In the fourth quarter, the Raiders quarterback tossed a 61-yard pass to Ruggs, which essentially put the game out of reach.

Nevertheless, we should note in both contests, Carr didn’t have to beat a team that scored 30-plus points, which gives him some help, though it’s on the other side of the ball.

Defensively, the Raiders have made a significant leap under Gus Bradley. They have the 10th-ranked scoring defense with five sacks for the season.

Derek Carr doesn’t have to lead the Raiders to 35-plus point outcomes to pull out victories because the defense has shown some resistance via pocket pressure. After the team’s Week 1 triumph over the Baltimore Ravens, he specifically highlighted his teammates on the other side of the ball.

“I hope someone praises the defense,” Carr said during the postgame interview. “They deserve it.”

Let’s not mistake MVP buzz for perfection. The Raiders offense has work to do, especially in pass protection and discipline in the trenches.

In overtime, defensive end Carl Nassib strip-sacked quarterback Lamar Jackson to set up the offense at the Ravens’ 27-yard line. Carr took over from there, tossing the game-winning touchdown pass to wideout Zay Jones.

On Sunday, the Raiders held the Steelers to 17 points, which is the lowest scoring output for their opponent since Week 10 of the 2020 season when they played the Denver Broncos (12 points).

Let’s not mistake MVP buzz for perfection. The Raiders offense has work to do, especially in pass protection and discipline in the trenches. Ruggs and Edwards are still growing into their starting roles. Vegas must figure out a way to regain traction with its ground attack.

With that said, Derek Carr clearly has a mastery of head coach Jon Gruden’s offense in their fourth year together, and Bradley has turned on the light switch for the defense. Right now, that’s enough to believe the Raiders finally have a different feel to them.

With Derek Carr healthy in a stable offensive system and a formidable defense, the Silver and Black can sustain its momentum past Thanksgiving for a shot at a playoff berth.