Derek Carr Contract Extension: How Can the Raiders Afford It? 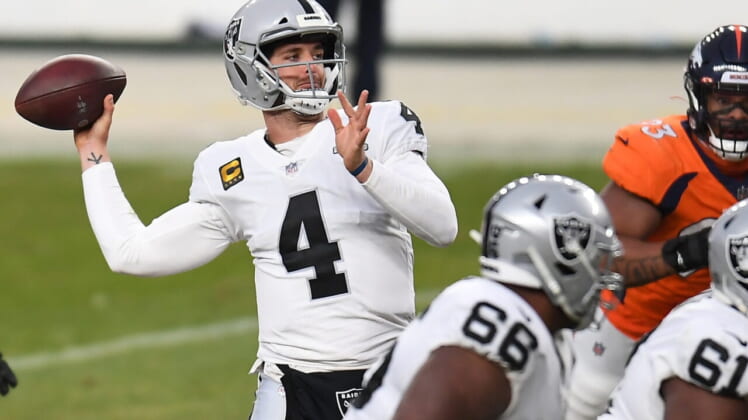 The last time the Raiders signed a Derek Carr contract extension, they made him the highest-paid player in the NFL. What would the numbers look like if they were to extend him now and could they make it work with the salary cap?

Derek Carr enjoyed one of the best years of his career in 2020, throwing for a career-high 4103 yards and a 27-9 touchdown to interception ratio. Carr has been the Raiders’ starting quarterback for seven seasons now and overall has done a good job – although there is a percentage of Raider Nation who would argue the opposite. With his play in 2020 showing real signs of improvement, spending his third year in Jon Gruden’s offense, is it time to talk about a Derek Carr contract extension?

In the past few seasons, Carr has helped the Raiders’ offense take another step and become one of the better units across the league. He has been a natural fit in coach Gruden’s scheme and with every passing year he has taken another step forward.

The last time the Raiders gave a Carr contract extension, it made him the highest-paid player in the league. While this extension will certainly not return him to the top of the list, he wouldn’t be far off, and making the money work would be a concern for the Raiders.

Good quarterbacks don’t grow on trees and the fact that the Raiders have one that is already comfortable and familiar with the system is a big bonus. While there have been plenty of trade rumors about the Raiders going after a new quarterback, that would take valuable assets that a team with so many holes to fill cannot afford to give up. Figuring out a Carr contract extension makes sense for Gruden and company.

The Raiders are stuck in a division with Patrick Mahomes and Justin Herbert for the next decade – two young quarterbacks who have shown a lot of promise. Making sure that they are stable at the position is going to be key moving forward as they attempt to capture the division title.

How Much Would a Derek Carr Contract Extension Run?

The last time Derek Carr signed an extension — a 5-year, $125 million deal signed in 2017 — he was instantly the highest-paid player in all of football. Considering some of the massive deals handed out recently to the likes of Mahomes and Deshaun Watson, that’s unlikely to be true this time.

Considering his play of late, a Derek Carr contract extension would likely fall somewhere between $30-35 million per year. This would mark a raise on his last contract and put him firmly within the top tier of quarterback deals.

Currently Mahomes paces the NFL with an average annual value of $45 million for the recent mega-deal he signed. If we assume that Carr gets the high side of that range ($35 million), that would be tied with Russell Wilson for the third highest deal at the moment.

It’s important to remember: as time goes on, contracts continue to rise. Thus, Carr being the third-highest paid quarterback right now means many will have deals that surpass him just as they have since he was the highest-paid after his first extension.

Can the Raiders Afford a Carr Contract Extension?

At first glance, the Raiders’ salary cap situation isn’t too pretty. The team has whiffed on some big free agent acquisitions in recent seasons and now are left with a few bloated contracts to deal with.

The good news for the Raiders is that over the next few offseasons they have the chance to cut these players with minimal dead money, thus creating some cap space that could possibly go towards a Carr extension.

It will be up to the front office to decide which of these players are worth keeping and which are worth cutting for the cap savings, but with a few savvy moves it becomes clear how the Raiders can open up their cap space.

Considering that many of the potential cuts have not lived up to their expectations, it shouldn’t be too difficult a decision for the team if they do give do decide on a Derek Carr contract extension. While the big deal may slightly limit the ability for the team to upgrade other areas in the short-term, if the Raiders are convinced that Carr can continue to put up points as the quarterback they should get an extension done.