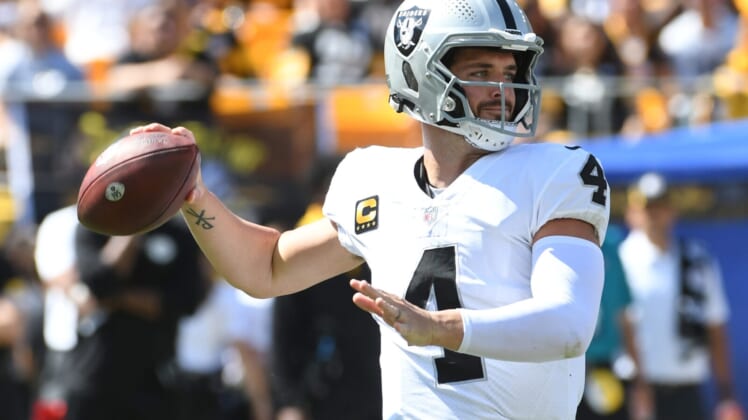 Even without Josh Jacobs, their key weapon on the ground, and a more limited role for leading receiver Darren Waller, Derek Carr led the Las Vegas Raiders (2-0) to their second-consecutive win as they topped the Pittsburgh Steelers (1-1) 26-17 in Week 2.

Derek Carr was 28-of-37 on his passes for 382 yards and two touchdowns and has now passed for 817 yards in two weeks — a new franchise record for yards in consecutive games to start a season.

“He had some long drives, he was big again at the end of the game against two great defenses two weeks in a row and it’s a big reason why we’ve been able to win,” Gruden said of Derek Carr’s hot start.

Although the Raiders (2-0) only rushed for 52 yards as a whole, and Waller was not found as much as he was last week, Carr found eight other receivers in the Raiders win. Henry Ruggs III, Hunter Renfrow, Kenyan Drake, and Waller each recorded five receptions to lead the Raiders.

During Las Vegas’ second drive of the third quarter, leading 9-7, Derek Carr got into a rhythm, finding six different receivers on his first touchdown drive. Carr began the drive by finding Bryan Edwards for an 18-yard pass.

After a sack set up 3rd-and-9 at their own 37, Carr found Renfrow for a 23-yard gain to extend the drive. Two plays later, he found Ruggs for a 30-yard gain before finishing the drive on the next play for a 9-yard touchdown pass to Foster Moreau to take a 16-7 lead with 5:07 remaining.

However, after the touchdown pass, Carr was down with what appeared to be an apparent leg injury after taking a lower-body hit with the pocket collapsing. After a few minutes, Derek Carr got up, walking on his own power back to the sidelines and a brief stop into the injury tent.

When Carr was down, not only were the trainers checking him, but his teammates both from the offense and those who were coming out for the extra point were standing around the 6-foot-3 quarterbacking lying on the ground.

“I remember laying there and Derek Carrier coming over,” Carr said of the moment. “All of a sudden, I look up and there are 30 people. The first thing I asked was, ‘did he catch it?'”

After Steelers’ rookie running back Najee Harris scored his first NFL touchdown to cut the Raiders down to two, 16-14, for 25 yards with 11:23 left in regulation, the Raiders came right back with Carr back on the field, leading the offense.

During that drive, the Raiders faced third-and-10 on their own 39-yard line. Carr threw downfield, finding Ruggs for a 61-yard touchdown to give the Raiders their nine-point lead back, 23-14.

In addition to his five catches and the big touchdown, Ruggs led the team with 113 yards.

The Carr-to-Ruggs bomb was similar to the big score last year in Kansas City and against the New York Jets, both were two road wins last year for the Raiders.

“We spend a lot of time coming up with a good play that gives our guys a chance and that’s just a very small percentage,” Gruden said. “He helped us blew the top off at Arrowhead (Stadium), who helped us win that game, the Jets, and today that was a big play. Not many guys can run that fast and tracked the ball.

“It was certainly a big play, but the protection – with the revolving door upfront – in a critical and a throw from a quarterback, who’s hurt, there’s a lot of good stuff there to go around.”

Not only did the offense finds success, but so did the defense, limiting Steelers’ quarterback Ben Roethlisberger to 27 completions on 40 attempts for 295 yards with a touchdown and an interception.

Gruden praised the defense for their contributions to limit the Steelers offense to just 17 points in front of the Black and Gold’s home opener.

“Solomon Thomas had a sack today,” Gruden said of the defense. “I think Quinton Jefferson and Yannick Ngakoue are burning us more than people know. And Denzel Perryman is playing great football. KJ Wright has jumped in and assumed KJ Wright-like status. It’s really a credit to a lot of people in the organization and I’m ready to go.”

Roethlisberger was pressured on third-and-10 and threw it up for Trayvon Mullen to get the interception and return it for 15 yards to the Pittsburgh 39-yard line.

Following the pick, things did not go the Raiders’ way. After back-to-back fumbles – which was both recovered by the Silver and Black – there was a false start penalty on Alex Leatherwood leading up to a third-and-long, which set up for a Dylan Carlson 46-yard field goal to open the scoring.

Carlson made all four of his field goal, including a 45-yard field goal with 24 seconds remaining in the game to seal the victory.

Next week, the Raiders come back to Allegiant Stadium to face the Miami Dolphins at 1:05 p.m. on Sept. 26.

Gruden said the team, and his hot QB Derek Carr, will have to focus and get ready to face the Dolphins.

“We’ve got AFC wins and we’ve got to get ready for Miami,” Gruden said. “So we’re going to keep our level-headedness and proud of our accomplishments, yet I think this coaching staff and this team is going to find ways to get better because we have to. We have a number of injuries.”