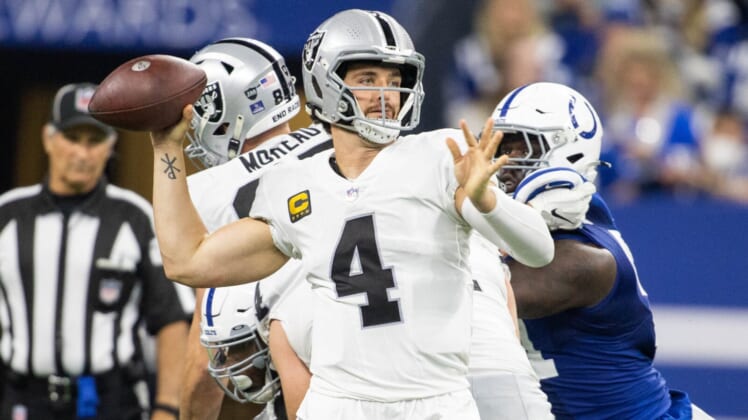 Is Derek Carr a top-10 quarterback in the NFL? Analysts and even some Las Vegas Raiders fans have pondered that question this season.

Anyone who watched Carr lead the Raiders to a 3-0 record through September would’ve put him in the top 10 or even higher. Without a run game and behind a shaky offensive line, he put the offense on his back, recording 1,203 yards, six touchdowns and two interceptions with a 65.6 percent completion rate through the first three weeks, including two overtime thrillers.

In that span, Las Vegas beat the Baltimore Ravens, Pittsburgh Steelers and Miami Dolphins, three squads that went into Week 17 in the hunt for a playoff spot. Following Sunday’s games, the Dolphins fell out of contention.

Thanks mainly to Carr’s performances earlier in the season and some big-time throws against the Indianapolis Colts Sunday, the Raiders hold tiebreaker advantages over three of the other four teams in the playoff hunt.

Of course, Derek Carr didn’t elevate the Raiders to this point alone. This year, he can rely on a solid defense that’s had its lapses but came through over the past few weeks, allowing an average of 15.7 points per game since Week 15.

Let’s be honest. Carr hasn’t played his best football over the past month, which pushes back on his supporters who would rank him among the league’s top-10 quarterbacks. While we can point to the absence of wideout Henry Ruggs III and tight end Darren Waller, Carr’s turnovers have hurt the Raiders in some spots.

Since Week 11, Derek Carr hasn’t thrown for multiple touchdowns in a game. Over the past four contests, he’s turned the ball over eight times (five interceptions and three fumbles lost). Here’s the problem with him. You have to accept the good with the bad out of necessity.

On the one hand, the Raiders need Carr to push the ball downfield. When he’s too conservative, the offense hits a rut. Yet, a quarterback who takes frequent deep shots will likely turn the ball over at a higher rate. So, his skeptics have to be careful about criticizing some of his long throws if they’re sick and tired of him dinking and dunking downfield, which leads us to another discussion about his performances.

Which version of Derek Carr will we see Sunday?

The top quarterbacks have a consistent playing style. You know what to expect from them on game day. This year, Carr faced a unique set of circumstances, losing his head coach after Week 5, his top wide receiver after Week 7 and his star tight end over the past five weeks.

However, even before this season, Derek Carr had an identity issue. Before he broke his fibula in December of 2016, he had a gunslinger quality to his game, particularly under former offensive coordinator Bill Musgrave.

In 2017 under former offensive coordinator Todd Downing, Carr pushed the ball downfield, but he turned the ball over at a career-worst 2.5 percent rate and his accuracy dropped a bit.

Once former head coach Jon Gruden took over the offense, he reformed Derek Carr, boosted his accuracy but toned down his aggressive nature. While some may believe Carr struggled to put the leg injury behind him, he’s talked about how Gruden’s offense used the short passing game to open up big plays downfield later in games.

Finally, toward the end of the 2020 campaign, Carr started to show his arm talent with big-time throws downfield. He seemed to have the utmost trust and confidence in his weapons for the first time since wideouts Amari Cooper and Michael Crabtree lined up on the perimeter between 2015 and 2017. He had a speedy threat in Ruggs, who stretched defenses, a consistent down-to-down playmaker in tight end Darren Waller and a reliable receiver in Hunter Renfrow.

For most of the 2021 campaign, Carr has gone on the attack with some exceptions, most notably in Weeks 4 and 5 against the Los Angeles Chargers and Chicago Bears, respectively. With that said, despite losing Ruggs and Waller in recent weeks, he’s continued to challenge defenders all over the field with Renfrow, Zay Jones and a sprinkle of DeSean Jackson, whom the team signed in November.

Derek Carr can make pinpoint throws with zip and drop dimes in a bucket at his best. In their evaluations, he’s also more mobile than some of his critics give him credit for. But the 30-year-old doesn’t always show those qualities, specifically when he has trust issues with new receivers or his offensive line, which is a justifiable concern this season.

However, in the biggest game of his career, Carr has to show off his complete skill set and put his physical tools on display. He cannot revert to the 2018 and late 2019 Gruden years when he settled far too often for check-downs and safe targets with the Chargers’ sixth-ranked scoring offense on the opposing sideline.

While the Raiders defense has played well through most of December and into January, the Chargers have scored 28 or more points in five consecutive games. They’re a hyperaggressive team under head coach Brandon Staley.

For the first time since their Thanksgiving matchup with the Dallas Cowboys, the Raiders will likely need more than 23 points to win a football game. With running back Josh Jacobs battling a rib injury that cost him some snaps in the previous outing, Carr has to put together one of his best performances of the season with Renfrow, Jones, Jackson and possibly Waller, who could return Sunday.

Many people have already crowned Justin Herbert as one of the league’s best quarterbacks and the biggest threat to topple the Kansas City Chiefs and Patrick Mahomes in the AFC West. Carr can assert himself and propel his team into the discussion with a trip to the playoffs at stake.

But once again, we have to pose a few questions.

Will Derek Carr have to rely on his defense to keep the scores close after some early mistakes and come up big in the clutch? Will he challenge the Chargers’ defense in different areas of the field with a quick and confident start? Or will fans grow frustrated with his early off-target throws and intermittent tendency to take a short gain over the big play? We’ve seen all three versions of Carr in a rotation this season.

Whatever the case, the Raiders vs. Chargers matchup will command all the eyeballs in the primetime Sunday Night Football slot, which means Derek Carr can reaffirm his critics’ concerns if he comes up small or change their minds with a big finish after a chaotic 2021 term. With looming contract discussions coming up in the offseason, he could have a career-redefining moment.