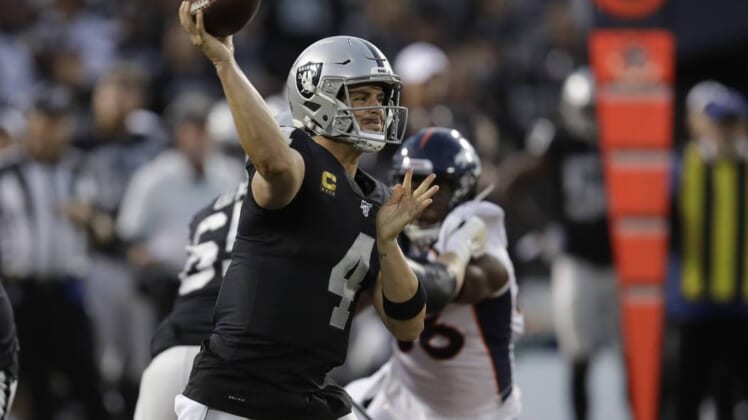 In a big win over division rival Denver, the Raiders, after a week of side-show worthy off-the-field hijinx by Antonio Brown, show progress as they kick off the 2019 season.

Ok, it’s just one game but last night’s 24-16 win for the Raiders was a significant step in what has been a tumultuous 18 months for Las Vegas’ future home team.

With the complete idiocy that was the Antonio Brown ruse, it was uncertain how the team would respond on the field as started the season on Monday Night Football in Oakland.

Yes, coach Jon Gruden said his team was focused and the breakup between the team and the most unprofessional wide receiver to ever play the game was not a distraction. Still, that’s what coaches always say and the proof would be needed as Derek Carr, Vontaze Burfict and these new Raiders lined up against a formidable Broncos team.

And, as former Raiders defensive back Leo Gray told me on CBS Sports Radio 1140’s The Rotation on Monday afternoon, Oakland always plays its best with its back against the wall and the team rallied around the “us against the world” mentality.

From the get-go, franchise quarterback Derek Carr played with an almost visible sense of focus having endured the roller coaster that was the Raiders past five days. Carr, dialed-in and comfortable in year two in Gruden’s offense, put in an almost perfect performance. Not only was he hyper-accurate (finished 22-of-26), but his footwork and ability to move in the pocket and create second chances was flawless.

Carr passed for 259 yards and a touchdown and didn’t turn the ball over once. It was an efficient night and with a dominating performance on defense, and key contributions by rookie running back Josh Jacobs (23 for 85 yards; 1 catch for 28 yards, 2 TDs), and Tyrell Williams big night (6-105, TD), Carr asserted himself in a way we hadn’t seen since 2016. In fact, by many accounts, Carr looked better than he did in 2016 – albeit with small sample size.

The humble quarterback was quick to credit the addition of his new targets for his successful night.

“I told you guys from day one when we got (OT) Trent Brown, it was like Christmas,” Carr said after the win. “And then when we got Tyrell Williams – there ain’t nothing better than Christmas – this feels pretty good as I got two big gifts this year.”

Brown had a dominating night as did the entire Raiders offensive line – despite missing two starters in the suspended Richie Incognito and the injured Gabe Jackson. Williams had a big night taking over the abandoned WR1 role. For most who have watched the speedy and sure-handed receiver during his career, it wasn’t a surprise.

Still, this is Derek Carr’s team. This is the year so many have called a make or break year for the player many have predicted (even wished) won’t make it like Moses into the promised land of Las Vegas and the new Allegiant Stadium. Carr, who claims not to pay much attention to the criticism he’s had to unfairly endure the past two seasons, has clearly stepped into a more vocal leadership role. He’s done so without changing who he is and how he uses his own style.

Despite that fact, I can see the change in Carr from a distance. He senses the urgency but I don’t believe it’s a selfish urgency. He wants to win and believes they’re making the right moves to make it happen. He’s all-in on Gruden’s plan and he’s made it his own.

There has been great progress with this team and franchise. Even though last night was a great start for the Raiders in 2019, let’s not get too ahead of ourselves. As I have said over and over again on our radio show – don’t get to high when things are going well (like this morning), and don’t get too low when this team faces significant challenges (and it will) this season.

It’s a process and undoubtedly the Raiders, at times, will take two steps forward, and one step back.

Seeing Carr perform and lead like he did last night is the best sign of all. The success of the Raiders now, and in the future, squarely lies on his shoulders.

And it’s clear: Carr is ready to lead this team towards future success.