Depth a key for both teams as Avalanche visit Kings 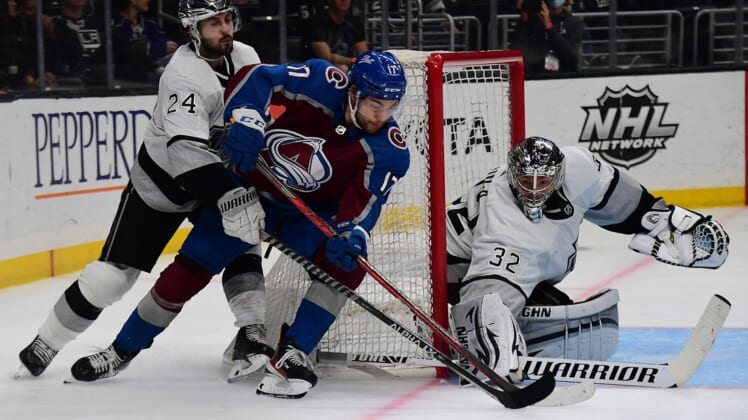 The Los Angeles Kings will likely need to continue relying on their depth when they host the Colorado Avalanche on Tuesday night.

In the past week, the Kings have lost several key players to injuries.

The Kings still managed to rally for the win after Martin Frk scored the tying goal with 32 seconds left in regulation.

Rasmus Kupari also scored in regulation for the Kings. Both he and Frk were recalled from Ontario of the American Hockey League over the weekend in an effort to reload the roster following the rash of injuries.

“The organization, as a whole, is one big team,” Kings coach Todd McLellan said. “It pays off when they all play the same way.”

McLellan was especially pleased with Kupari’s line, which included rookie Quinton Byfield and Gabriel Vilardi, another former first-round pick of the Kings who is still trying to land a main role in Los Angeles.

“They wanted to prove that the staff made mistakes by not keeping them, and that’s what players have to do,” McLellan said. “If they keep proving us wrong, that’s a great thing.”

The Kings did not practice on Monday and the possibility of any injured players returning against Colorado won’t be known until the morning skate on Tuesday.

Colorado is also dealing with the recent loss of a key player, and Gabriel Landeskog is an especially important piece of the Avalanche.

Landeskog, who leads Colorado with 30 goals, was scheduled to undergo knee surgery on Monday and will be out indefinitely.

Landeskog played in a 2-0 loss at the Carolina Hurricanes on Thursday, but sat out the 3-0 win against the visiting Calgary Flames on Sunday.

“It’s something going on with his knee that’s been bothering him for a while,” Colorado coach Jared Bednar said. “It was getting worse.”

The Avalanche will need to rely even more on their elite offensive players such as Nathan MacKinnon, Nazem Kadri, Mikko Rantanen and Cale Makar.

MacKinnon scored two goals in the win against the Flames, Rantanen had a goal and an assist, and Kadri also contributed an assist.

Replacing Landeskog’s leadership ability will be another challenge.

“When you lose your captain, other guys have to step up and be vocal in the locker room,” Rantanen said. “Sometimes, we can get a little bit quiet during the games on the bench, and I think we need to try to work to be better with that.”

Bednar will likely send Darcy Kuemper back into the net against the Kings after he made a career-best 46 saves in his fourth shutout of the season against the Flames.

The Kings will likely counter with Cal Petersen, as McLellan continues to alternate Petersen and Jonathan Quick in net.

Petersen is 0-7-0 in seven career starts against the Avalanche, however, with an .898 save percentage and 3.78 goals-against average.