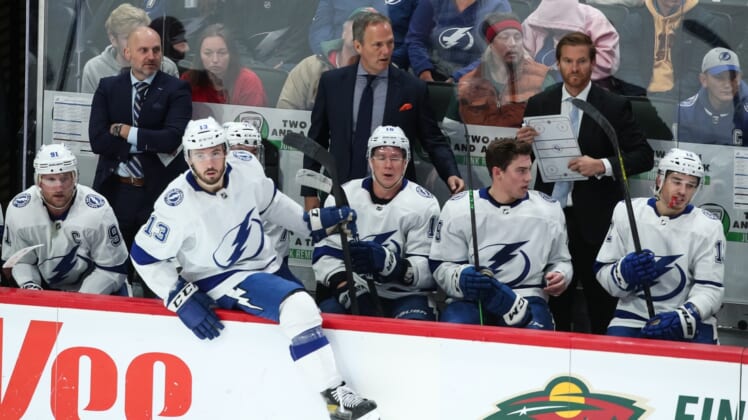 The Tampa Bay Lightning are having to overcome much adversity, and more has been added in the past 24 hours.

Holding the top spot in the Atlantic Division, the Lightning learned that when — perhaps if — they host Montreal on Tuesday night as the NHL reopens play, they will do so without one of the game’s top goaltenders, his backup and a top defenseman.

All reportedly are either asymptomatic or experiencing mild symptoms.

During a season that has seen scorers Nikita Kucherov and Brayden Point out with lengthy injuries, the Lightning have leaned on their goaltending.

In another stellar season, Vasilevskiy — 17-4-3 record, 2.14 goals-against average, .928 save percentage — tops the league with 17 victories, one more than Carolina’s Frederik Andersen.

Veteran Elliott (3-2-1, 2.78, .903) has provided reliable quality, recording wins over Minnesota, Philadelphia and Ottawa — the latter being two of his former clubs during his 15 NHL seasons.

For Tuesday’s match against Montreal, assistant coach Derek Lalonde said the Lightning will call up two of their three goalies at the AHL affiliate Syracuse Crunch and another defenseman or two.

The Lightning, who had a Dec. 18 game against Colorado postponed, along with a contest five days later at Arizona — last played on Dec. 21 in Las Vegas and rallied to win 4-3 in the last match before the holiday break and subsequent pause.

In a preview of future COVID-19 problems, the game was the only one of 10 scheduled that day to be played.

As for Tuesday’s game against Montreal, Lightning captain Steven Stamkos, who scored the game-winner against Vegas, said Monday, “We have to prepare like we’re going to play. Obviously, things can change.”

The Canadiens are trapped in a three-game road losing streak and lost 3-2 to the Lightning in Montreal on Dec. 7.

Practicing on Monday for the first time since Dec. 19, Montreal had games postponed against the New York Islanders, New York Rangers and New Jersey Devils during last week’s pause.

The news is not good for Montreal, which is on pace for its worst season in team history.

“We’re only focusing and adjusting — almost to the hour — to the situation and to the number of cases we have,” Canadiens coach Dominique Ducharme said after Monday’s practice.

“We’re really looking to make sure we have enough guys coming on the trip.”